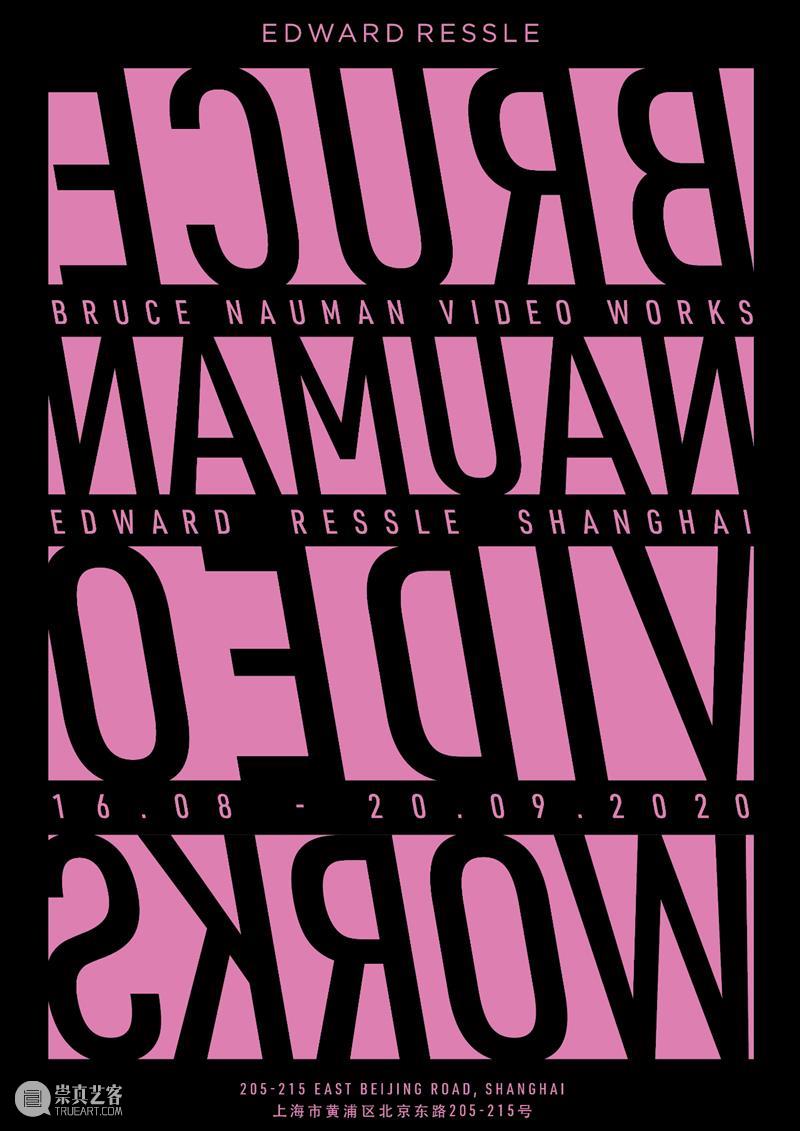 “If I was an artist and I was in the studio, then whatever I was doing in the studio must be art.”
— Bruce Nauman
Edward Ressle is pleased to inaugurate its new Shanghai gallery with “BRUCE NAUMAN: VIDEO WORKS”
, the first solo exhibition of the artist in China. The exhibition is organized in collaboration with the Video Data Bank (VDB) of the Art Institute of Chicago and the titles were in the original Castelli-Sonnabend video art collection. 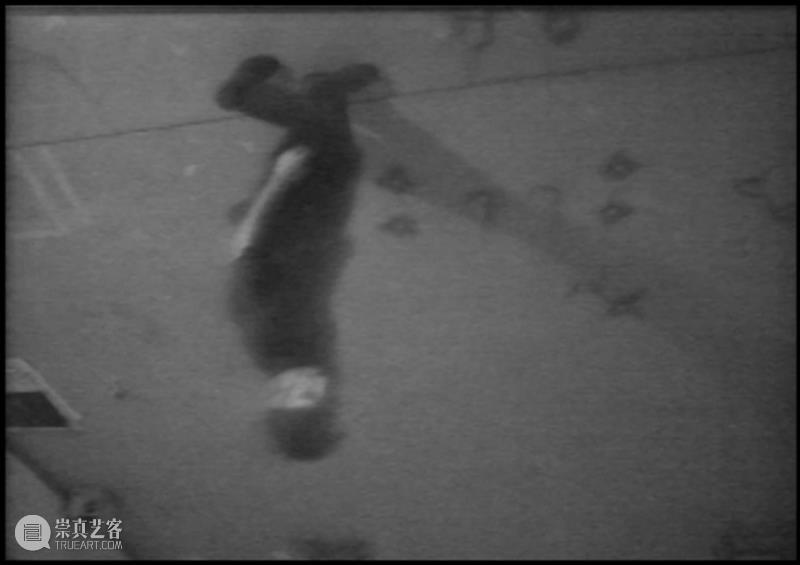 Bruce Nauman, Stamping in the Studio, 1968 | 01:01:35 | United States | English | B&W | Mono | 4:3 © Bruce Nauman | Courtesy the Video Data Bank at the School of the Art Institute of Chicago
“BRUCE NAUMAN: VIDEO WORKS”
features
five renowned key works produced between 1968 and 1969 that are widely considered amongst the most pioneering and influential works of 20th-century art history; radically changing not only artistic practice but also our general notion of art.
Recorded with a Sony Portapak video camera purchased by the legendary gallerist Leo Castelli, the artist was offered an opportunity to experiment with the flexibility of the recording machine. This culminated in an intense period of video making for Nauman where he created a series of monochromatic film pieces, performing repetitive actions such as stamping, jumping, playing the violin, bouncing balls, within the premises of his studio. Each work is around sixty minutes in length and when exhibited, they provide the audience the impression that Nauman has been performing these various mundane actions forever, and thus subjects himself and the viewer to a minor test of endurance. 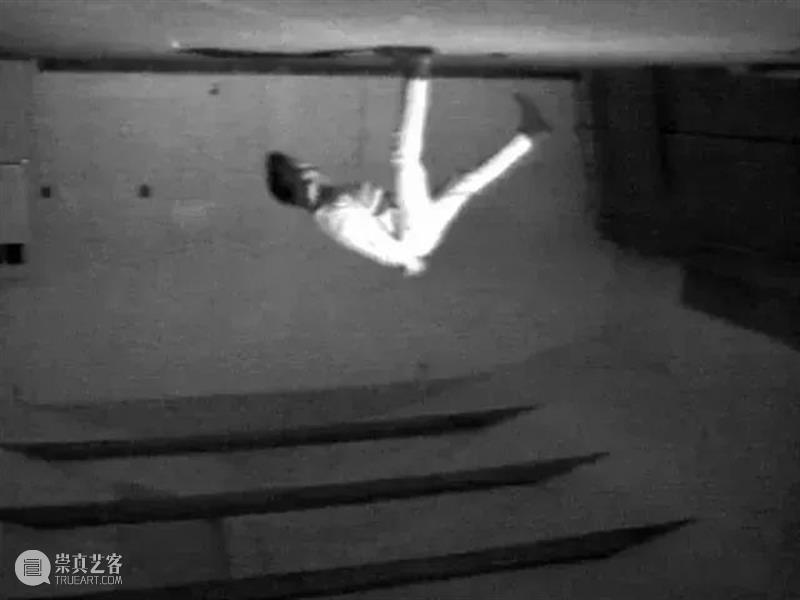 Isolated in his studio, his actions have no apparent reason or cause beyond his aesthetic practice. Using his body as the point of departure to explore the limits of everyday situations, Nauman explored video as a theatrical stage and a surveillance device
within an installation context, influenced by the experimental work of Merce Cunningham, Meredith Monk, La Monte Young, Steve Reich, and Phillip Glass. 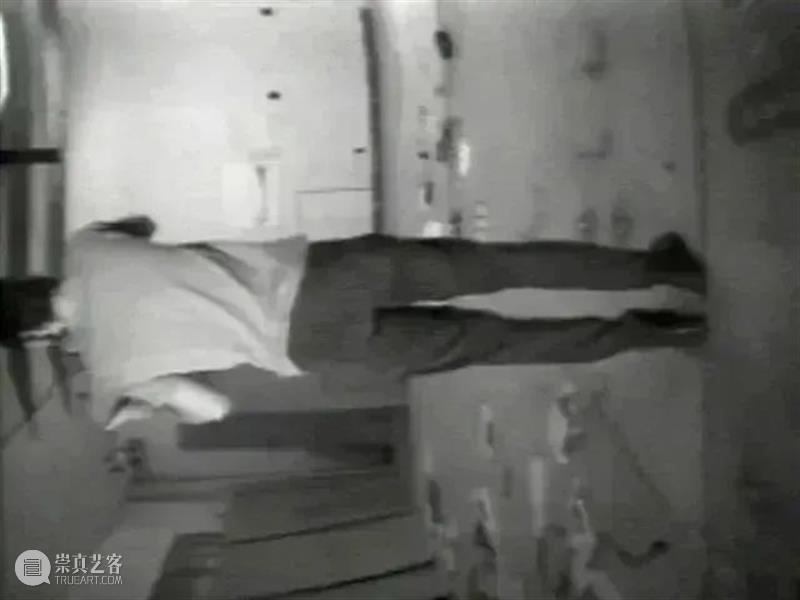 Borrowing Dadaist ideas about the procedures and operations of art-making, the idea of treating his own body as a physical tool or material with which to make sculpture or performance earned Nauman a reputation as a conceptual pioneer in the field of sculpture, as Nauman himself stated
, “if you can manipulate clay and end up with art, you can manipulate yourself in it as well. It has to do with using the body as a tool, an object to manipulate.” 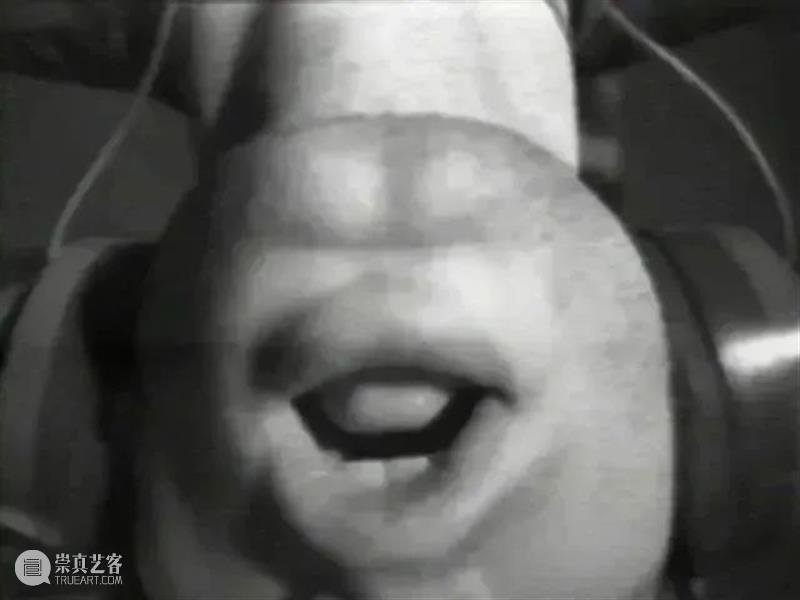 Refusing consistency and categorization, Nauman’s prodigious and unconventional oeuvre has made benchmark contributions in a multitude of areas, expressing his thought-provoking ideas in a wide range of media and materials such as sculpture, photography, neon, drawing, printmaking, performance, sound and video. As Glenn D. Lowry put in a nutshell in his foreword to the exhibition catalog of the major MoMA retr
ospective "Bruce Nauman: Disappearing Acts" (2018-2019),“Challenging the ways in which conventions become codified, his work erases all forms of certainty, mandating that we craft our own meanings rather than accede to more familiar rules. The lessons learned from Bruce’s penetrating intelligence become more and more necessary every day.” An indisputable hero of postmodernism with a singular lightning sharp wit, Nauman is known for his groundbreaking, provocative work that poses important questions about the nature of creativity. As Nauman describes,"From the beginning, I was trying to see if I could make art that… was just there all at once. Like getting hit in the face with a baseball bat. Or better, like getting hit in the back of the neck. You never see it coming; it just knocks you down. I like that idea very much: the kind of intensity that doesn’t give you any trace of whether you’re going to like it or not."
About the Artist 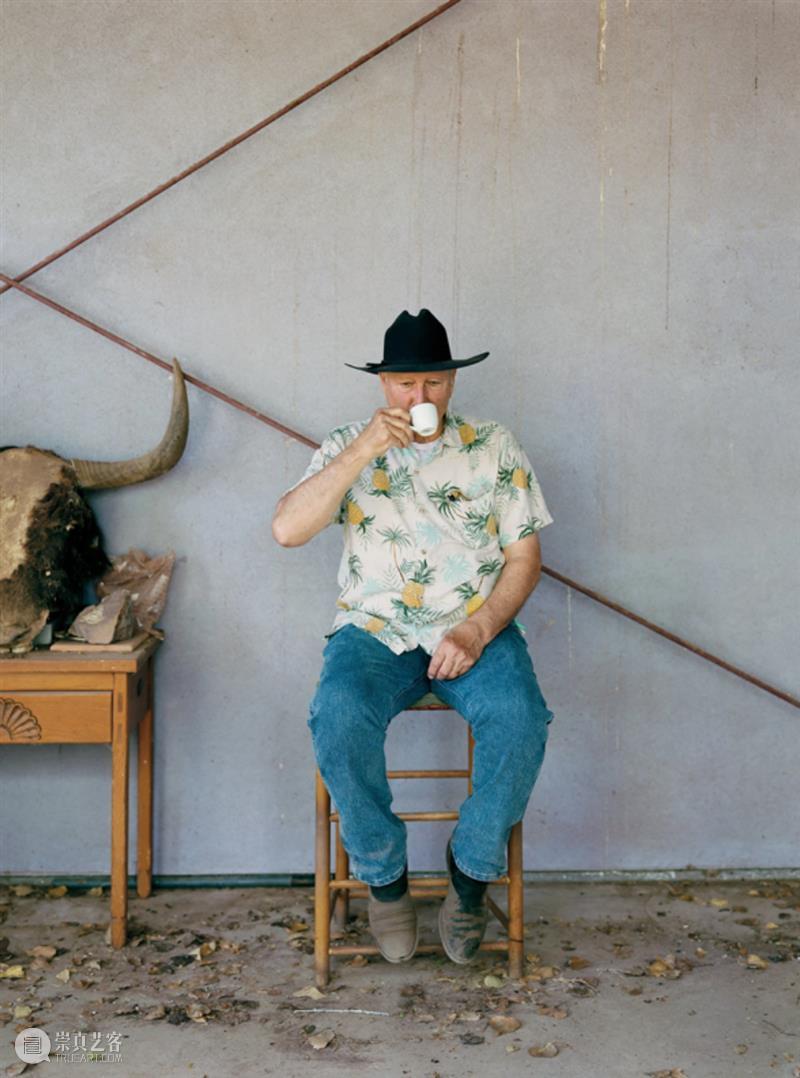 His first survey was organized by the Los Angeles County Museum of Art (1972) and the Whitney Museum of American Art (1973). A survey took place at the Whitechapel Art Gallery, London in collaboration with the Kunsthalle Basel and the Musée d'Art Moderne de la Ville de Paris (1986-1987). A major retrospective, co-organized by The Walker Art Center and the Hirshhorn Museum, opened at the Museo Nacional Centro de Arte Reina Sofia, Madrid, and traveled to Minneapolis; Museum of Contemporary Art, Los Angeles; the Hirshhorn Museum, Washington, D.C.; The Museum of Modern Art, New York; and Kunsthaus Zurich (1993-1995). Recent solo exhibitions include “Raw Materials”, commissioned for Tate Modern’s Turbine Hall (2004), and “A Rose Has No Teeth: Bruce Nauman in the 1960s” at the Berkeley Art Museum, Castello di Rivoli, and Menil Collection (2007-2008).
In 2015, the Fondation Cartier presented an exhibition focused on video and sound sculptures.
Nauman received the Wolf Foundation Prize in Arts in 1993, the Wexner Prize in 1994, the Golden Lion at the 48th Venice Biennale in 1999, and the Premium Imperiale in 2004 in Japan. Nauman represented the United States at the 2009 Venice Biennale; the pavilion was awarded the Golden Lion for Best National Participation. Nauman was the 2014 laureate of the Austrian Frederick Kiesler Prize. The Museum of Modern Art, New York organized a major Bruce Nauman retrospective in 2018, making him the first living artist to have two retrospectives at MoMA. He currently resides in Galisteo, New Mexico.

Established in the spring of 2016 in New York, Edward Ressle opened its doors in a historic prewar townhouse on the Upper East Side, neighboring the Met Breuer. Noted for its challenging exhibitions of artists from different generations such as Francis Picabia, Richard Prince, Andre Cadere, Mike Kelley, Sarah Lucas, and Katherine Bernhardt amongst others, the gallery has presented thought-provoking projects that embrace diverse artistic practices.
Located in a landmark building on 205-215 East Beijing Road in the heart of Shanghai’s historical Bund neighborhood, the gallery is within walking distance from the acclaimed Rockbund Art Museum, Christie’s, and the Peninsula Hotel. Measuring approximately 3,000 square feet, the space has revitalized the former headquarter of the Bank of Shanghai, whilst retaining the architecture’s Chinese aesthetic heritage and raw features of Art Deco. 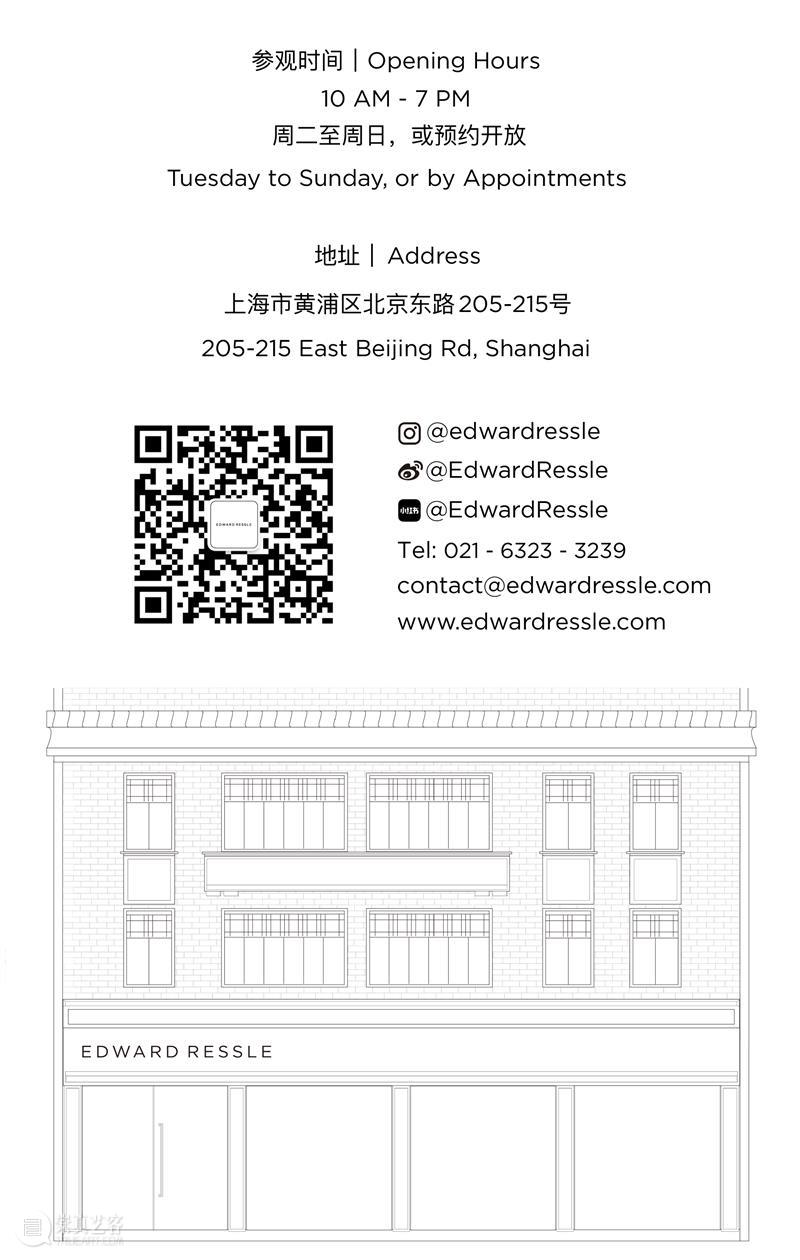