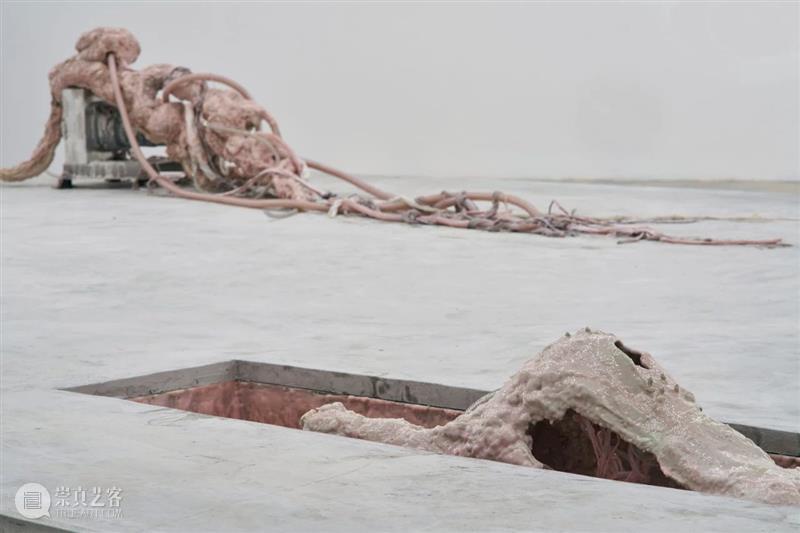 The group exhibition Breathing Through Skin has opened on November 7, presenting new and recent works by Mire Lee, Yong Xiang Li, Issy Wood and Pedro Neves Marques. Among them, Mire Lee's newly commissioned piece, Carriers, Horizontal Forms, reflects the artist's philosophical rumination about the concept of Vorarephilia, an internet subculture. With the aid of a pump, two sculptural bodies of different size and volume are connected through an internal circulatory system. When the power is on, the two bodies then become amphibians immersed in a slimy substance, tangled in an interdependent and symbiotic relation.

The article below was written by Alvin Li—curator of Breathing Through Skin—in fall 2019, originally published in Mousse Magazine #79. On this occasion, it is translated ad reprinted here with permission from Mousse editors. 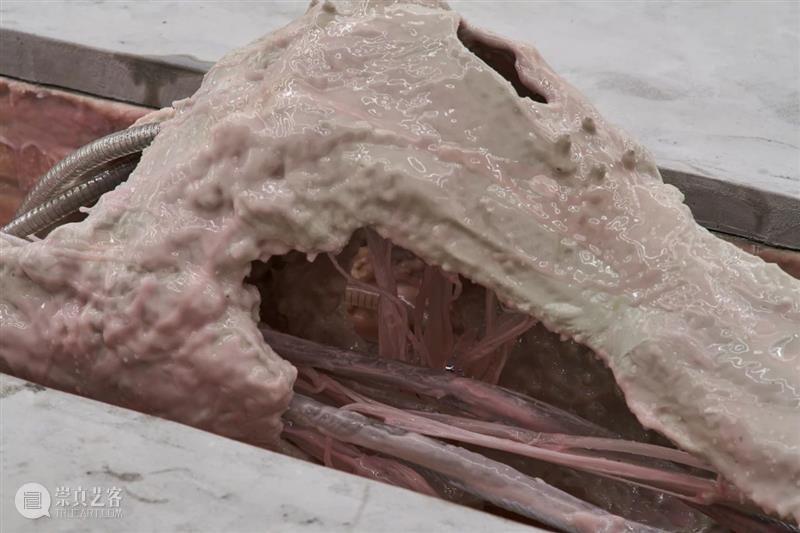 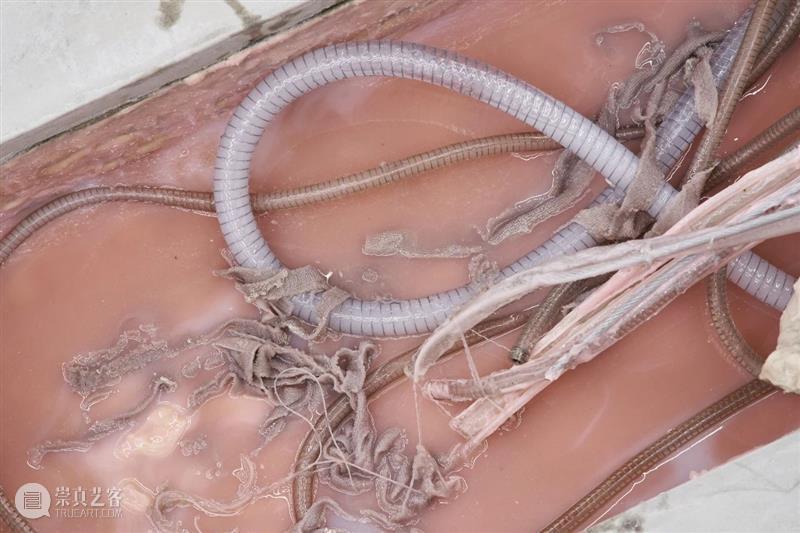 Vorarephilia: Mire Lee
Originally published in Mousse Magazine #79,
Fall 2019
Text / Alvin Li
I first encountered Korean artist Mire Lee via an Instagram story—a documentation of Andrea, Ophelia, at the endless house (2018). Her works, despite intermediary layers of digital conversion, evoked a convolution of haptic intrigue: the darkened studio space was dimly lit by a screen looping a voyeuristic video of Asian women in transit. Next to it, a mysterious, wet thing—towels, chains, silicone hoses, and steel wire entangled into a giant lump—slowly rotated in a pool of glycerin spread across a steel plinth suspended by a set of tentacular appendages. Suddenly the thing spasmed, making a loud noise as it disentangled itself and splashed gooey liquid onto the floor. Confronted by that creature born of machinery and slime, I felt a mixture of nausea and arousal. 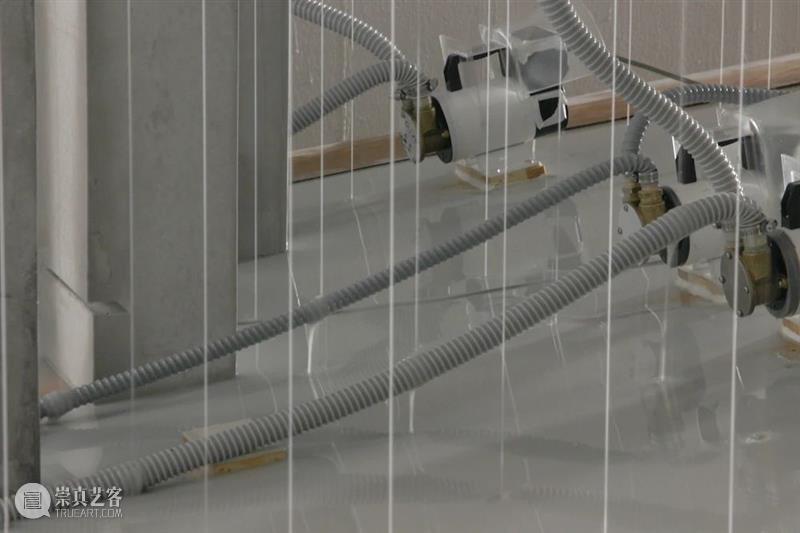 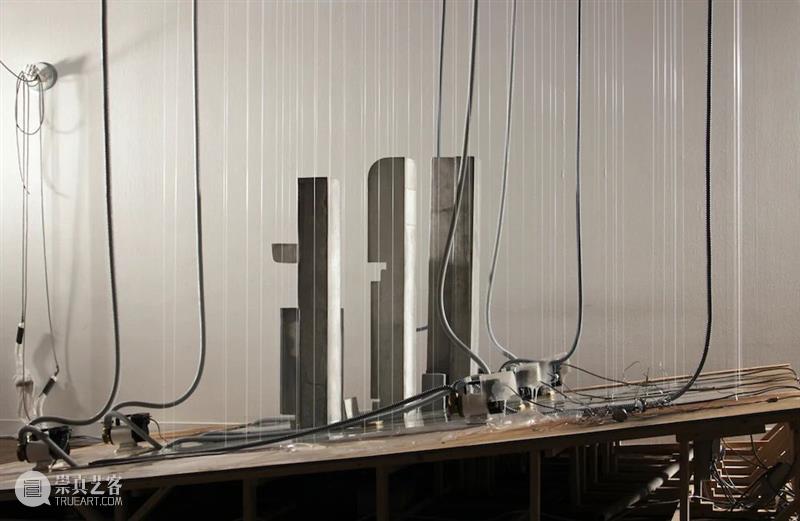 Andrea, in my mildest dreams，2016
Four plaster sculptures with the video, silicone mixed with oil, pump and other mixed media
Commissioned work by SeMA Biennale Mediacity Seoul 2016.
Presented in 'NERIRI KIRURU HARARA' Seoul
Museum of Art, Seoul.
Presented as a part of the installation 'the way things fall apart-in my wildest dreams'
Photo ⓒ김지영 Jiyoung Kim
Courtesy of the artist

Often employing minimal, kinetic technologies such as motors and pumps, Lee’s ghostly apparatuses simulate the raw, unruly affects and drives that make or break a subject’s body and psyche. The video footage in Lee’s aforementioned presentation was a compilation of nonsexual sequences that she extracted from Japanese porn—moments of naïveté before the female protagonists are “molested.” A different edit of the compilation first appeared in Lee’s 2016 mixed-media installation Andrea, in my mildest dream. There, four plaster sculptures, one bearing a screen playing the footage, stand in a pool of silicone liquid. Once turned on, the liquid is pumped upward into a Plexiglas box, only to fall again, dripping through holes in the box like an uncanny, cathartic rain.

The installation triggers an eclectic range of affects, from the orgasmic to the sentimental. What sort of bodily fluids is the gooey, milky rain meant to imitate? In conversation, Lee compares her obsession—and identification—with those female porn actors (“Andrea,” as she would call them) to an inexplicable fixation on nightmares and catastrophes. Her response calls to mind that dialectic between sentimentality and its darker undercurrent—a fascination with monstrosity and cruelty—as played out in sentimental literature since the eighteenth century. And while many would claim sentimentality a tool for empowerment, Lee constructs something more ambiguous, even absurd: a scene in which erotics and ethics perpetually feed and undo each other. 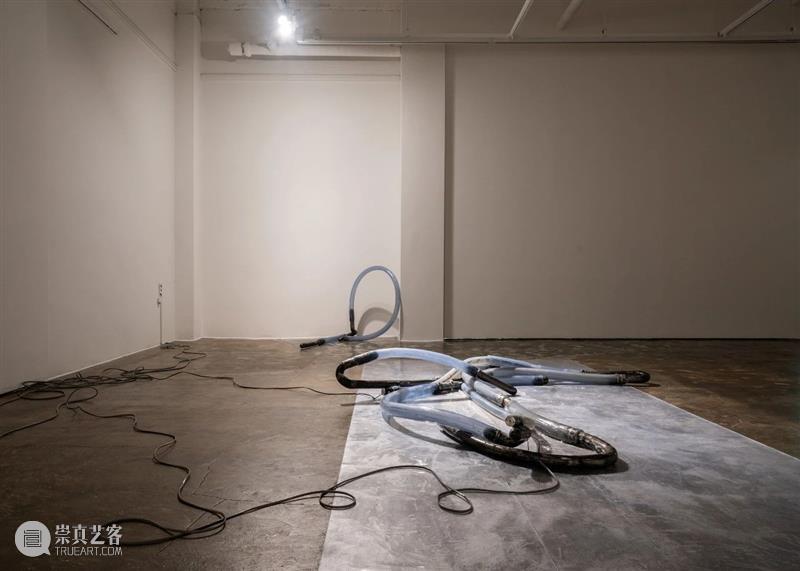 Since she relocated to Amsterdam, Lee’s work has taken on more biomorphic forms, while the ambiguity of submission and dominance, victimhood and sabotage, has persisted, further fine-tuned into an exceptional duet—between soft and hard, in material terms. every joint every spine every end (2018) is composed of PVC hoses and steel hooked to a motor and swirling slowly in grease, like pulsating umbilical cords severed from the fetus and yet attached to the mother, or some malfunctioning wetware. In Ophelia when you died (2018) we witness what seems like a mutant abortion as the “organs” (hoses and pipes) violently tear themselves into miserable scraps after running out of lubrication. From these frequent invocations of womb, guts, and mortality one catches a glimpse of an exceptionally original, and provocative, aspect of Lee’s endeavor: the apotheosis of vore1 from its paraphilic origin into a creative attitude and an ontological metaphor. In the erotic desire for the total obliteration of self, just as in an all-engulfing practice, one yearns for that threshold state in which all identity, distance, and meaning collapse. A relationality founded on a state of loss; the abjection of self par excellence. 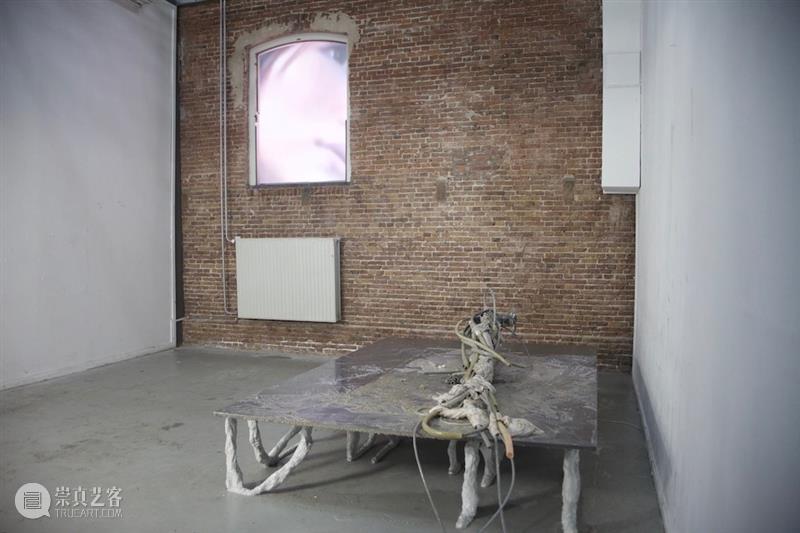 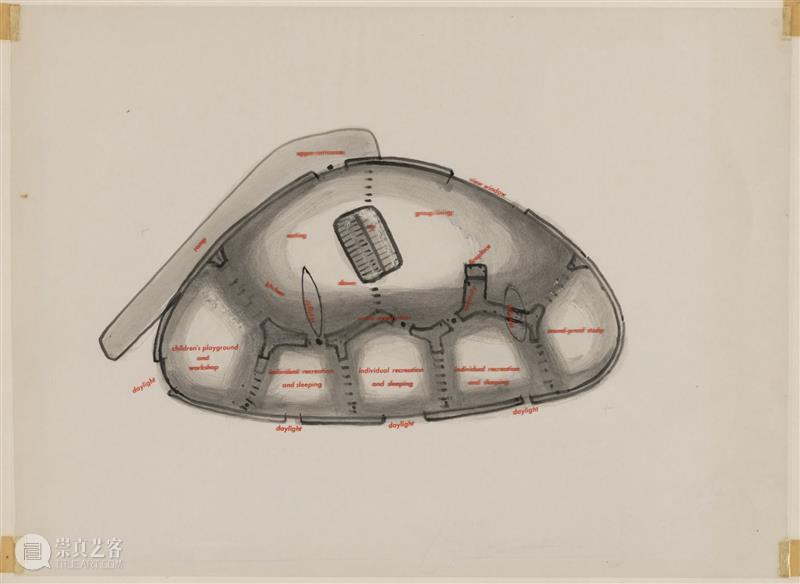 Back to our first encounter: what was missing from the documentation was, as already hinted in its title, a reference to Frederick Kiesler’s Endless House (1947-1960). Kiesler famously conceived of his house as a living organism where all ends meet to perform a sort of self-sufficient cyclicality. I read Lee’s appropriation as a gesture toward something much more somber, a metaphor for cruel entrapment. On a symbolic level, Lee’s abject sculptures—breathless, suffering, doomed to slow death as though by lethal infection—are inmates of our environment. With a ghostly glimmer, they mirror the lived experience of many—certainly, some groups more than others—in this era of universal suffocation. In time, the initial revulsion of their presence slowly dissipates into a sense of “asthmatic solidarity.”2 Like haunting, elegiac poems that chill the spine and curdle the blood, they take our breath away, then let it return with a vital vigilance, to endure. 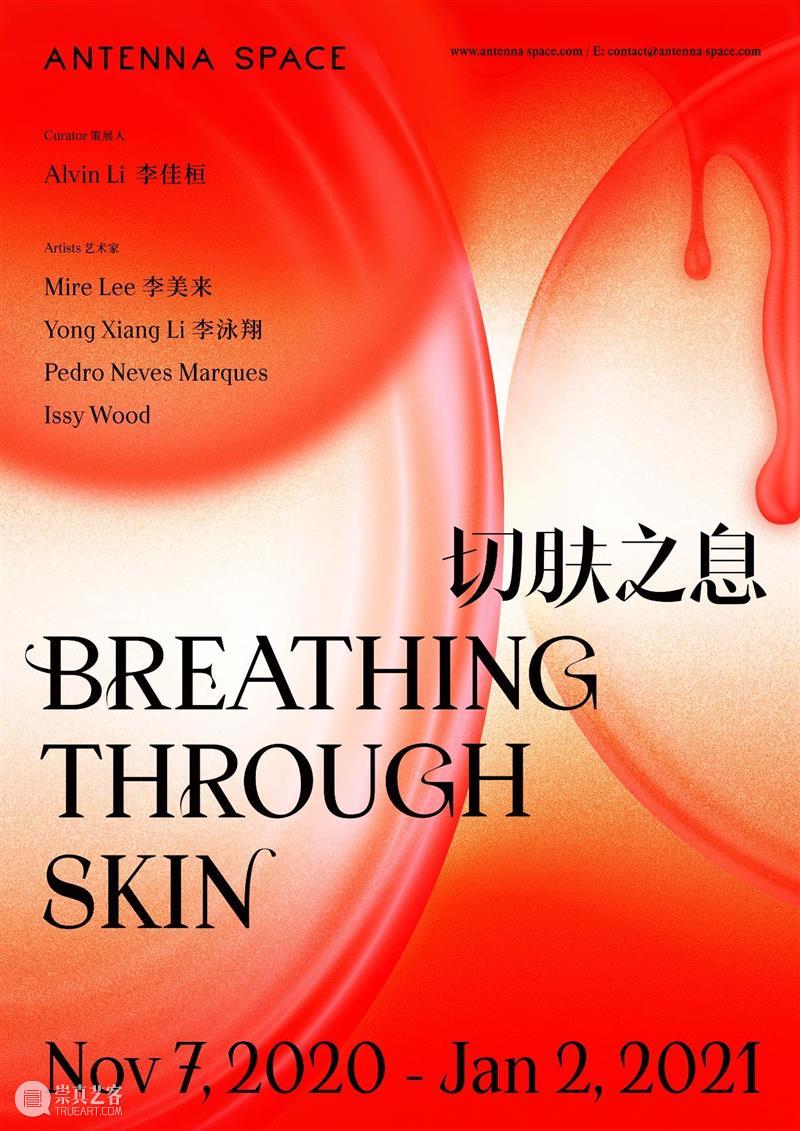 Mire Lee (b.1988, Seoul) currently lives and works in Amsterdam. She creates sculptural representations of the tense, uncertain zone between love and hate. Originating in the interaction between the artist and her created bodies of work, Lee’s sculptures are formed from materials such as steel, silicone, and clay, and function with low-tech kinetics and animatronic-like technology. Most of her pieces are site-specific, humanlike, and defined by affection. The tension comes from a personal attraction and attachment that also contains a strong layer of anxiety; jointly these feelings are transferred onto the sculptures, emotionally laden volumes that reveal hereditary discomfort. Lee perceives her practice as a consequence of ambivalent relations in which she takes ardent care of both her material input and sculptural outcomes. She testifies that her affective sculptural dedication can easily slip into fondness, fetishistic obsession, voyeurism, violation, or violence. Thus, her practice revolves around an abusive, almost masochist, relationship in which Lee wants to dominate and mould the material, have it surrender to her wants. At the same time, it is a reciprocal process in which the artist herself also is deeply affected by these intimate confrontations.
Lee has taken part in various exhibitions, including the solo exhibition War Isn't Won by Soldiers It's Won by Sentiments (Insa Art Space) and the group exhibitions Moving / Image (Arko Art Center), 2016 Media City Seoul “NERIRI KIRURU HARARA” (Seoul Museum of Art), 15th Lyon Contemporary Art Biennale “Where Water Comes Together with Other Water” etc.

Alvin Li is a curator, writer and Contributing Editor of frieze magazine, based in Shanghai, China. He currently serves as Artistic Advisor for the 59th International Art Exhibition of La Biennale di Venezia. Li’s writing on contemporary art and culture has appeared in international publications such as frieze,Artforum, Mousse, Art Agenda, Spike Art Quarterly, and ArtReview Asia, as well as in catalogues published by New Museum, New York, among others. In 2020, his exhibition proposal Liquid Ground, co-conceived with Julian Junyuan Feng, was selected by Para Site, Hong Kong, from their annual Emerging Curator program, and is scheduled to open in September 2021. In 2019, Li was invited to present research on Chinese-language hip hop in the format of a listening session at Triple Canopy, New York, and an original work of auto-fiction, Teeth, at CURRENT: LA Public Art Triennial. Li’s recent curatorial projects include Breathing Through Skin (Antenna Space, Shanghai, 2020); We Came to Linger (ALL Club, Shanghai, 2020); D.E.E.P. (chi K11 Art Museum, Shanghai, 2019); In My Room (Antenna Space, Shanghai, 2019); and The New Normal: China, Art, and 2017 (UCCA Center for Contemporary Art, Beijing, 2017). Li is the co-founder of CINEMQ, a queer collective that organizes monthly curated screening projects focusing on East Asian queer independent cinema. 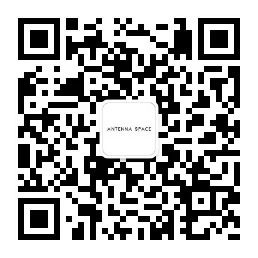 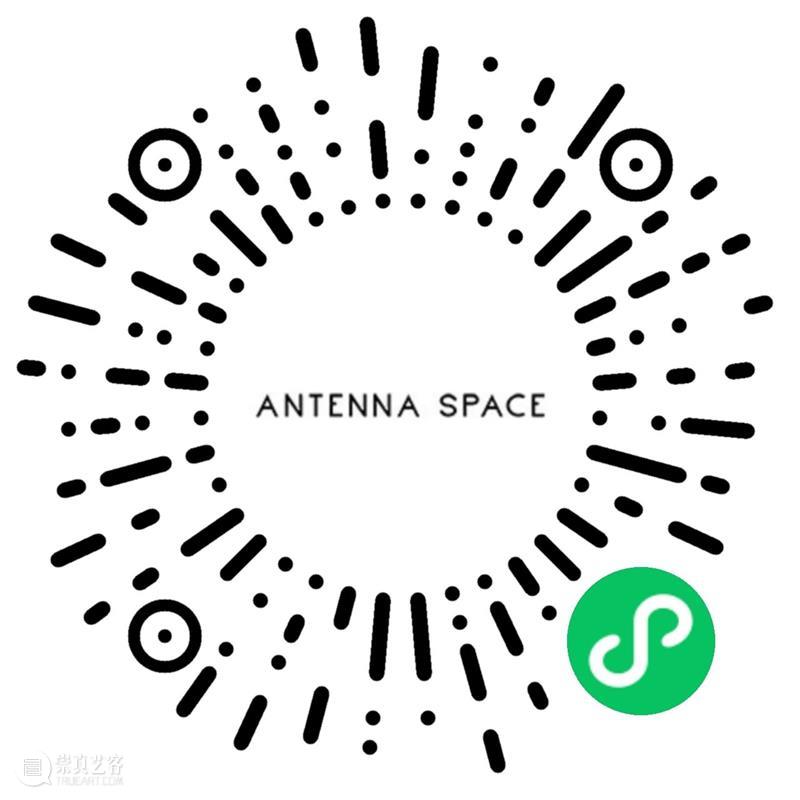