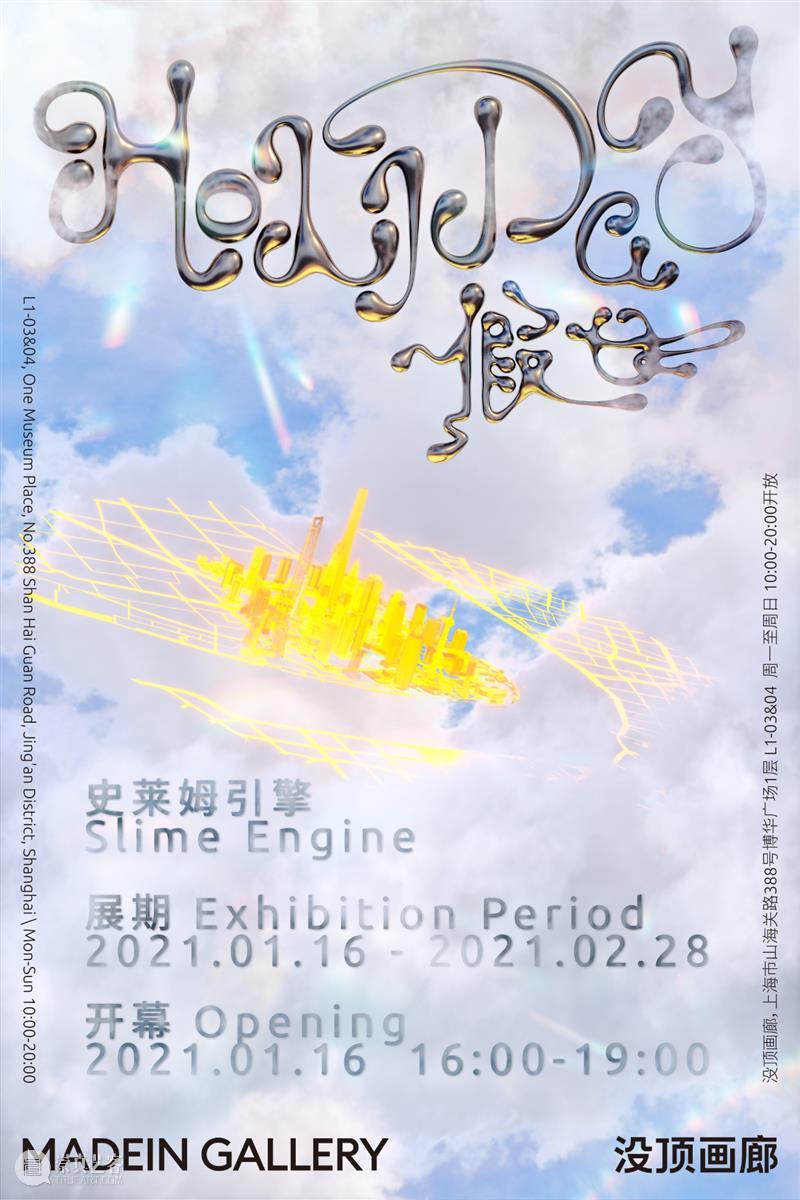 MadeIn Gallery is pleased to launch “Hol!day” on January 16, 2021, an exhibition by Slime Engine, a virtual exhibition platform operated and curated by young artists Li Hanwei, Liu Shuzhen, Fang Yang and Shan Liang. This is Slime Engine, the virtual platform’s first major presentation in a physical space. The exhibition draws together a couple of selected online projects into a brand-new holiday experience, including two interactive video games and various video works created by Slime Engine in collaboration with other artists, among which Territory is presented offline for the first time.

As 2021 begins, holidays follow; affected by COVID-19, the way people spend their leisure time and entertainment demands have also changed. Given the current context, Slime Engine proposes in this exhibition, an alternative concept for holidays at home during the epidemic. As an online platform, Slime Engine excels at integrating art, as well as interspersing and placing art in everyday experience, and presents a complete experience through construction of virtual scenes and worldviews.

Television and games as the main entertainments in contemporary households, have also become Slime Engine’s creative carriers in the exhibition. Headlines incorporates the structure of news programs as its vehicle, combined with the artworks of six artists (Fang Yang, Li Hanwei, Liu Shuzhen, Mo Shaolong, Shan Liang, Yi Chengtao) to present a completely fictional worldview. The two interactive games encourage the audience to assemble and create in Slime Engine’s worlds, as a way to break the identity barrier between the viewer and the creator. Slime Factory draws on the creativity of Lego gameplay, where players can choose different sculptures to re-assemble, and design art toys with contemporary zeitgeist; Variation is a simulation game with immense landscapes as the backdrop, where players can play the role of the Creator and freely create unique art worlds on different continents through assembling and arranging, at the same time players can also watch the construction of the world from the first point of view of the native people.

Slime Engine founded in 2017, operated and curated by Li Hanwei, Liu Shuzhen, Fang Yang, and Shan Liang. Slime Engine is dedicated to the development of unprecedented art creation, exhibition curating and experience. Through the communication and cooperation with artists, the use of virtual worlds that are not limited by time and space, presents profuse contemporary art form.

Fang Yang (b.1996 in Wuhan, Hubei) graduated from Shanghai Institute of Visual Arts in 2018, and currently lives and works in Shanghai. Through integration of popular culture, personal experience and masculinity, Fang’s practice conveys the uneasiness caused by the outdated paternal culture which was once advocated in the working class, and uses images and sculptures as outlets for violence.

Hu Rui, (b.1990, Liupanshui) currently lives and works between Guangzhou, Shanghai, and Hong Kong. He holds an MFA from the University of California, Los Angeles and a BFA from New York University. His work mostly takes the forms of computer generated image, video, installation, and text, and has been exhibited and screened at the UCCA Center for Contemporary Art (Beijing), LOOP Barcelona (Spain), Photofairs (Shanghai), International Film Festival Rotterdam (The Netherlands), International Symposium on Electronic Art (Hong Kong), and Skulpturenmuseum Glaskasten Marl (Germany), among others. He currently teaches at the Hong Kong University of Science and Technology.

Xi Li (b. 1995 in Suzhou, China) graduated from Pratt Institute, and is currently based in New York. Working with photography, collage and video in a practice that centers on the relationship between the self and the world, Xi searches for a way to reposition herself in this time to confront the restlessness that flows within this new world.

Li Hanwei (b. 1994 in Xuzhou, Jiangsu) graduated from Shanghai Institute of Visual Arts in 2018, and currently lives and works in Shanghai. Li’s practice is based on adapting the forms of commercial advertisements and films as metaphors. Through the study of communication methods, the artist uses CG images to establish a worldview in the fictional world where counterfeit of the real world and science-fiction coexist, as a way to present the intersection of contemporary culture forms and individual identities.

Liu Shuzhen (b. 1995 in Shenzhen, Guangdong) received his bachelor degree from Shanghai Institute of Visual Arts. He currently studies at Musashino Art University in the direction of creative leadership. By redefining and transforming meaning, Liu’s works activate the positive connections between disappearing events and people, and explores new possibilities of integrating them into the current life style.

Mo Shaolong (b. 1989 in Henan) currently lives and works in Shanghai. Mo's works are mostly based on realistic contexts, from which he abstracts his understanding of the objective world. His practice involves video, installation and painting, which endows the daily spectacle with multiple metaphors and provides the viewer new texts for interpretation. In 2020, Mo turns to the exploration of painting language and image exemplification, implying the interval space and dimensional experience between the visual reality of material and the substance itself, portrait, as well as reality and non-objectivity.

Shan Liang (b. 1997 in Jiangsu) graduated from China Academy of Art in Game Art Design, and currently lives and works in Shanghai. Her works mainly consists of videos and sculptures, usually around the study of loveliness, presenting sweet and mysterious visual effects.

Linyou Xie (or LINYOUXIE) is currently living and working between China and the UK. After graduating from Bauhaus University in Weimar, Germany, he received his Masters in Experimental Animation from the Royal College of Arts, London. Most of his work attempt to metaphorize the symbolic violence by deconstructing the already existing visual concept through 3D animation, blur the boundary of them, and reconstruct them into new meanings.

Yang Qinhua (b. 1992 in Shanghai, China) currently lives and works in Tokyo, Japan. MA graduated from Tama Art University, Information Design-Media Art department. Yang applies various media methods to her works. The main theme of her works in recent years is about ‘training’. Not only about the seemingly autonomous repetitive behaviors that people nowadays usually do in their daily lives, while in fact is being induced and trained by this modern society in order to increase the productive forces for itself. Also including the ‘training’ process when all the objects, even metaphysical conceptions in real world enter the digital archives in this internet era.

You Ada (¥ouada) (b. 1987 in Fujian) graduated from China Academy of Art, and currently lives in Hangzhou. Familiar images in daily life, nostalgic animated characters, fashion brands, video games or scenes from TV shows are all common elements in You's paintings and installation works. He is interested in placing himself in youth, street and other cultures by means of compulsory crossovers.

Yi Chengtao (b. 1992), designer and artist. He graduated from Pratt Institute in Industrial Design and New York University with a master's degree in UX Design, and has worked as a designer in Apple, Microsoft and other technology companies. His creative direction is dedicated to discuss and criticize the aesthetics of visual relationship in the context of consumerism through various mediums, exploring new rhetoric and perspectives. Yi is now working and engaging in art creation in Seattle, USA.

Fengyi Zhu (Born 1993, Beijing) is an artist, designer & engineer currently living and working in New York and Beijing. He received his bachelor’s degree in Applied Mathematics from the University of California - San Diego (2014) and his master’s degree in Interactive Design from the ITP program of New York University (2017). Zhu chiefly presents his works in mediums ranging from video, software to sculptures and installations. His practice mainly focuses on exploring the expression of the materiality, which may refer to its origin and contingent tendency to evolve and change, through that to understand the dynamic system of its own and how it affects the world and ideologies. 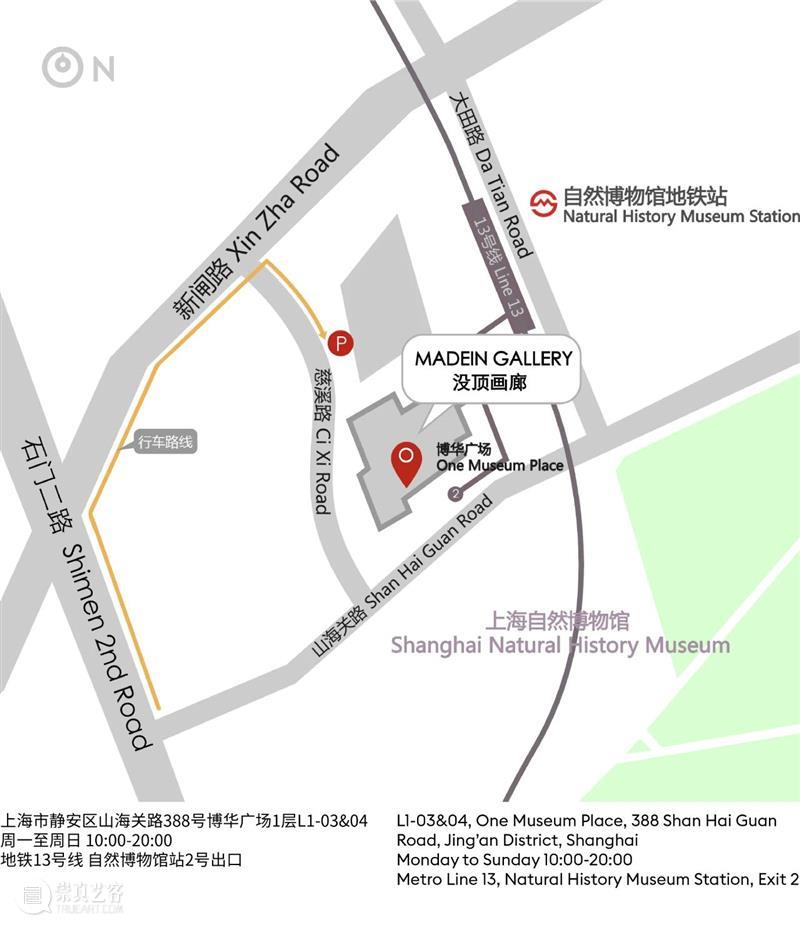