The landscape art created by Kang Haitao provides a sense of distance. Even though you are just a few steps from his paintings, each of the objects of a painting appears to lie in the distance. Delineated by gloomy and blurry scenes, serene but shrunken spaces, and intense but translucent “accumulation of ink”, the paintings manifest the sensibility of distance itself in showing the visuals. It seems that Kang Haitao looks at the scenery through the lens of a telescope, which produces distant, enigmatic, and in most cases detailed segments. In this way, the landscape in the vast expanse of the universe comes across as being discovered by the artist. 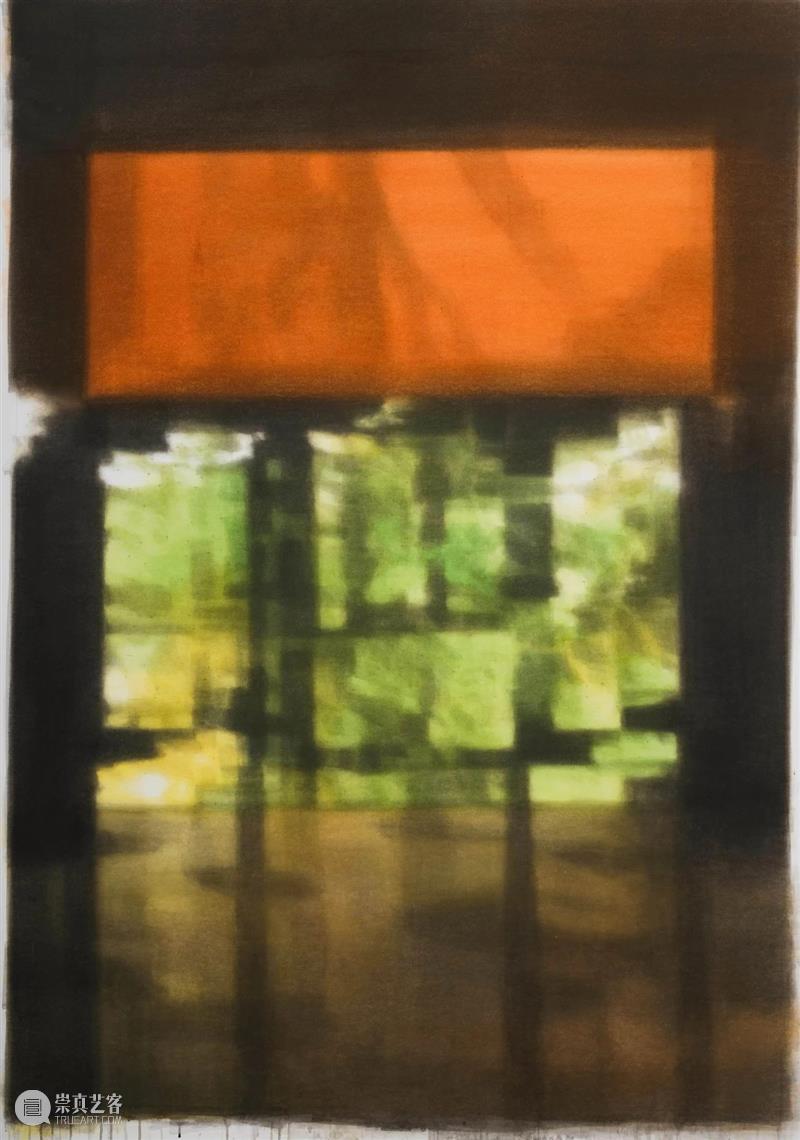 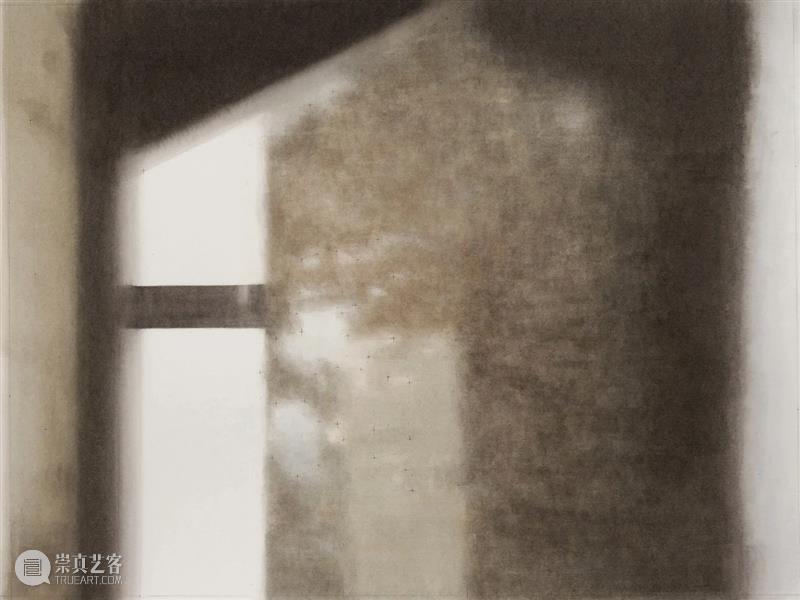 Acrylic on paperboard，75.5 x 100.5 cm
Taking a closer look at the paintings, the painterly brush strokes are evident while the sense of distance is made manifest simultaneously. However, the viewers come within sight of the stylistic details other than representational visuals. In the distance, the objects appear blurred as a matter of fact; that being said, moving away from the visibility of the objects themselves, the viewers have already shifted the focus on the massively and intensively accumulated brush strokes, the pencil marks and lines, and the temporality engraved on the paperboard. It is the physical and psychological elements that enable the audience to assume that what Kang Haitao does is to draw an astronomical chart with a magnifying glass rather than painting the landscape. 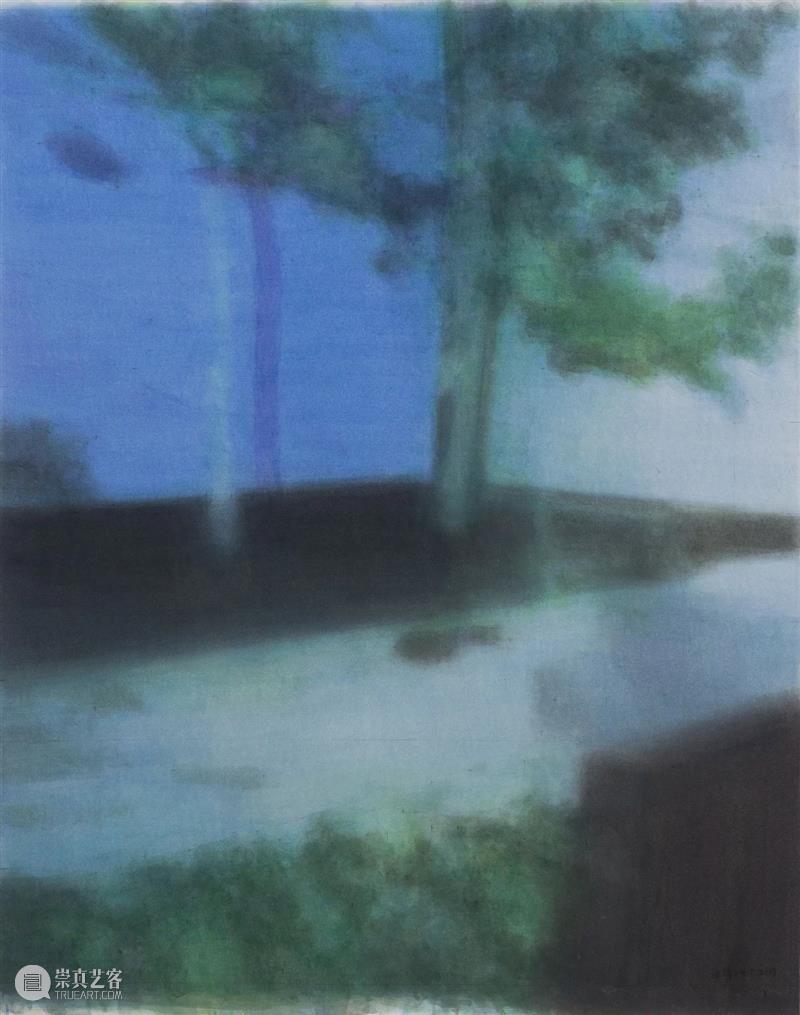 There has been a considerable tension between the macro and micro levels of Kang’s work, on one hand, the artist would view the scenery in the manner of remote observation, but on the other hand, he would make paintings in the manner of surveying and drawing charts. This reminds us of the science of astronomy, which studies celestial objects in the entire universe and elementary particles of astronomical origin as well; meanwhile, astronomy also deals with the measurement of the distant astronomical objects solely based on limited information, which may cause blurry images of astronomical objects of ten times. In this sense, Kang Haitao’s way of work has an outstanding quality of astronomy; this arguably best explains the sensibility of distance as seen in his landscape paintings. 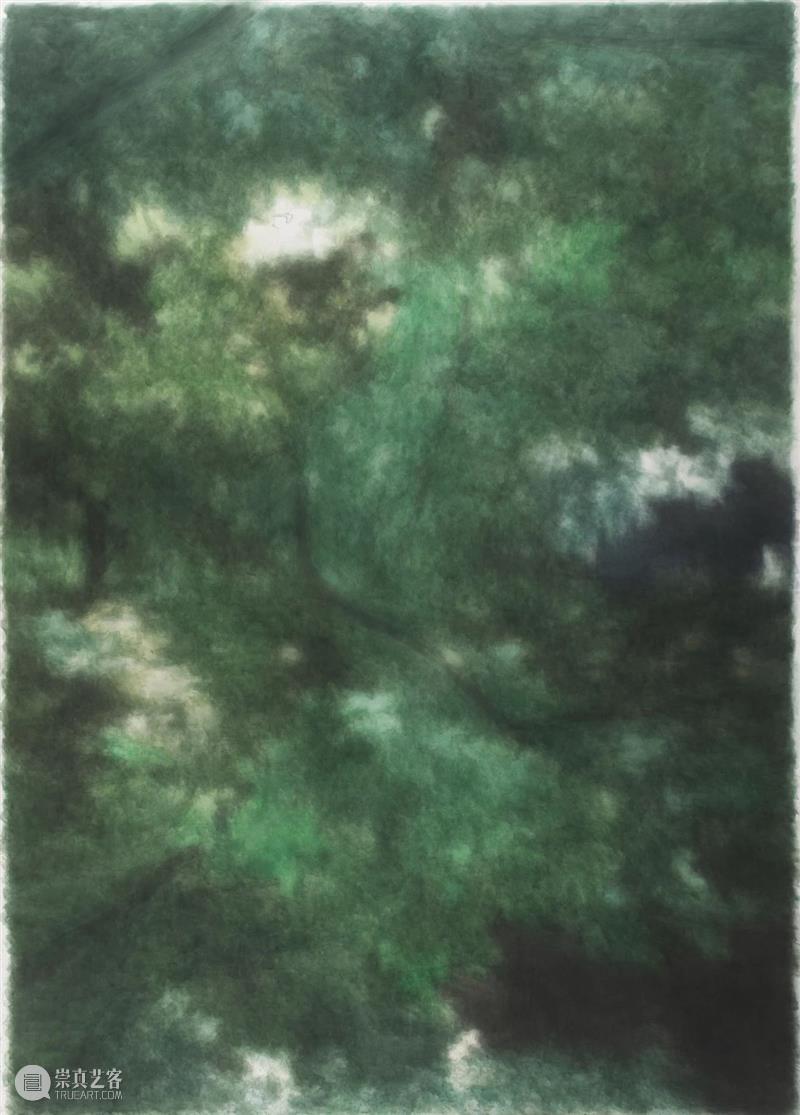 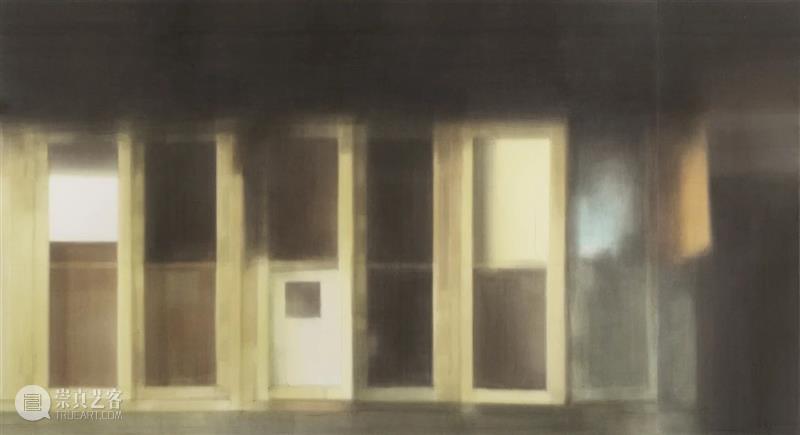 Acrylic on paperboard, 167 x 305 cm
Astronomy has to do not only with “distance” but also “light”. Before the first discovery of gravitational waves, electromagnetic waves had been almost the only subject and medium that astronomy traditionally relied on. Light is another critical element in Kang Haitao’s work as he is keen to delineate light of all kinds, including the bright light shining through trees, light and shadows on the buildings, light coming through curtains or windows, light reflected from mirrors, skylight or lamplight, the transparent finish produced from the layers of color, and the astronomical effect created by the blurry or intermittently unstable images of objects and spaces. It would be no exaggeration to say that Kang Haitao depicts objects for the sake of the depiction of light, and he has happened to make light scenes the subject of his work of art. 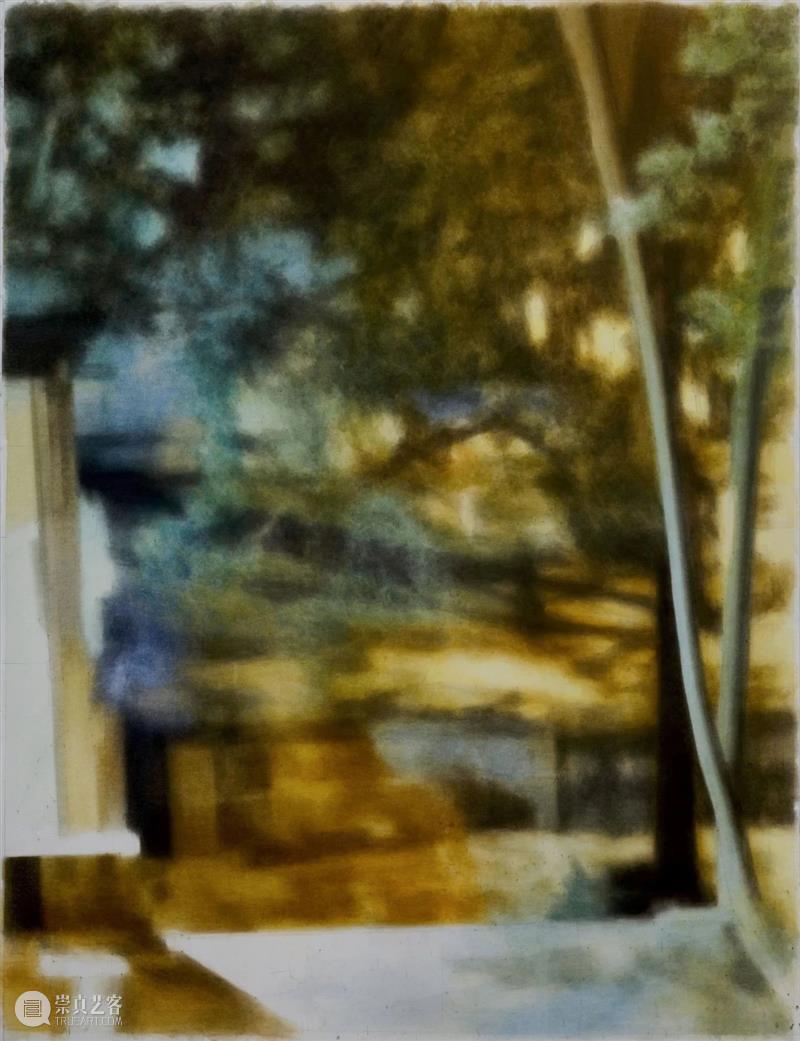 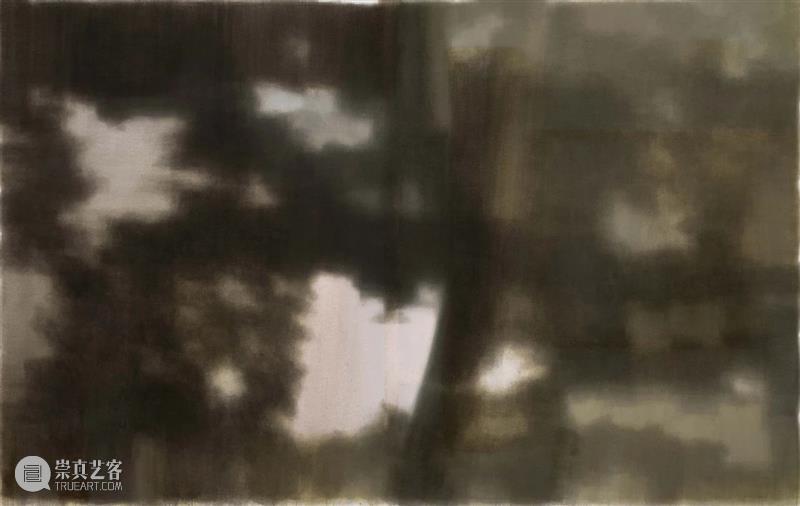 Acrylic on paperboard, 229 x 361.5 cm
In the history of art, landscape, as an artistic genre, has been defined by a focus on natural scenery. From John Constable’s landscape paintings and Monet’s garden and lawn to the photographs of clouds taken by Alfred Stieglitz, nature has been studied in the process of its artistic representations, in which artistic techniques, languages, and viewpoints have changed simultaneously. Kang Haitao’s paintings have continued to foster the relations between art and nature, however, the artist has been recycling the concept of “landscape” based on his new experience and viewpoint. 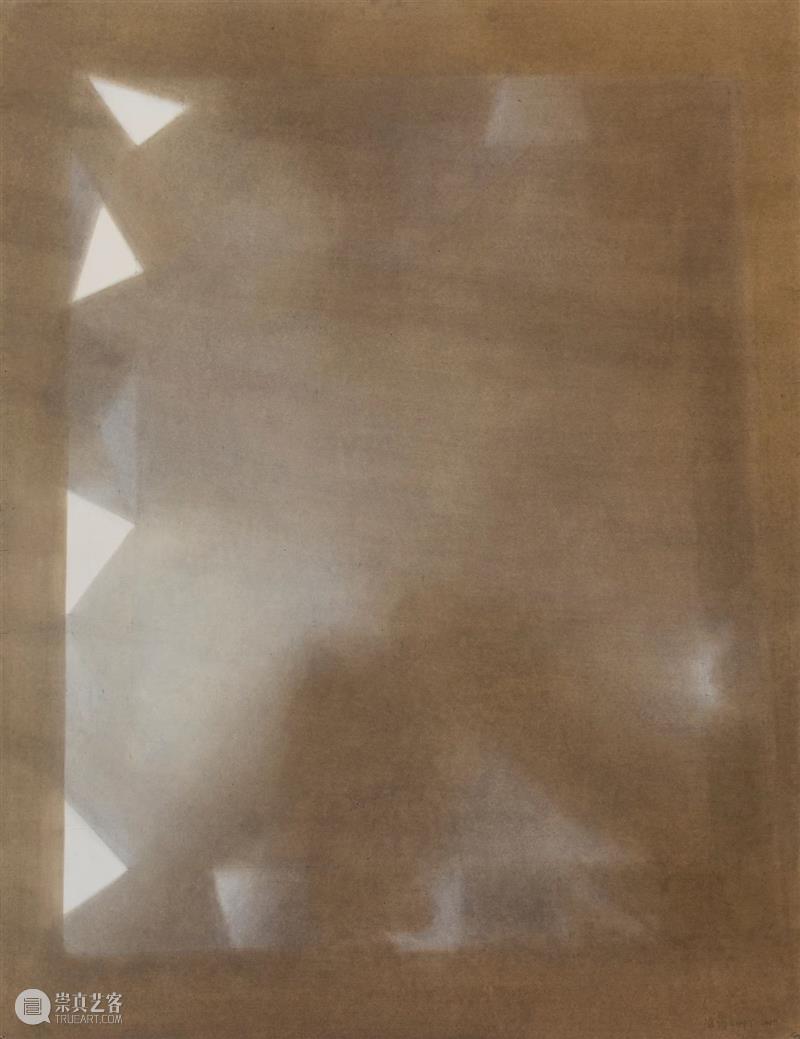 Let us not argue with the qualities of being ostentatious of our times, however, compared with traditional society, the most unique feature of modern life lies in the fact that it allows for boundless magnification of individuals’ viewpoints while it puts a strict limit on the scope of experience. For example, it is easy for a person to get timely updates on international news but one forgets the details of what they ate for dinner last night. Each of us generates more and more information and the scope of cognition is being broadened to a greater extent, however, we have greatly missed opportunities for real-world experiences. In other words, we are moving towards a more indirect, abstract world that is formed from concepts. Fundamentally, Kang Haitao’s paintings confront and capture such a world without the presence of humans. That is to say, it is a world that is conceptualized and non-representational, a world that seeks after imaging rather than representation. In the world, objects are no longer what we view, what we view has shifted to the “viewing” per se; therefore, Chuck Close may not necessarily be labeled as a portrait painter. Similarly, Kang Haitao’s paintings cannot be categorized as landscape paintings in the traditional sense, rather, his paintings can serve as a distinctive way of viewing in such an intersectional era of landscape art.

About Author
Bao Dong, born in 1979, curator of Kang Haitao's solo exhibition, Astronomy of Landscape. he is an art critic, curator and co-founder of the art fair "Beijing Contemporary Art Expo".
About the Gallery
PIFO Gallery concentrates on the participation of the course of Chinese contemporary art and the exploration of post-war European master artists and seeking for all possibilities of art power in the dialogue and collision between the two aspects. As a major gallery in China specialized in the study and promotion of abstract art, and also the main institution to continuously explore the various possibilities of figurative art at present, PIFO is convinced that the experience of art emerges from the new world created by one revolution after another; The artist's work is the third eye to explore the world. For collectors, PIFO provides expertise and encourages them to explore their own unique perspective because only the combination of the two can make a great collection. We hope to see a growing number of collectors to take on the roles of a connoisseur, with a more in-depth understanding of Asian and Western contemporary art, and appreciate the artists discovered, reshaped and firmly believed in by the gallery.
Press enquiries/images
Junfang Shao shaojunfang@pifo.cn
T: +86 10 59789562
All other enquiries
Sophia Wang sophia.wang@pifo.cnM: +86 18210011135 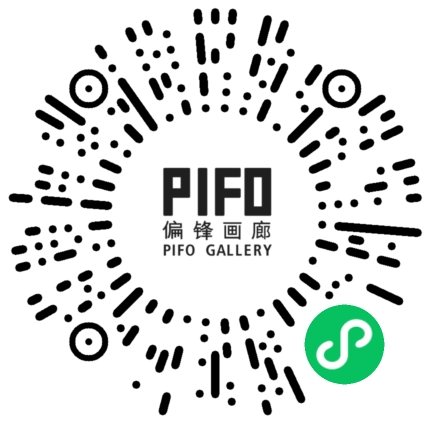