The series of installation works by Huang Lan titled Mermaid Project and Shopping Cart&Holy Water are currently on display at Parkview Green Art. The mermaids’ heads and tails are separated: they don’t swim in the sea, but they seem to fly in the sky. Children visiting the exhibition point the golden mermaids with surprise: “Mom, the mermaid is broken!”. 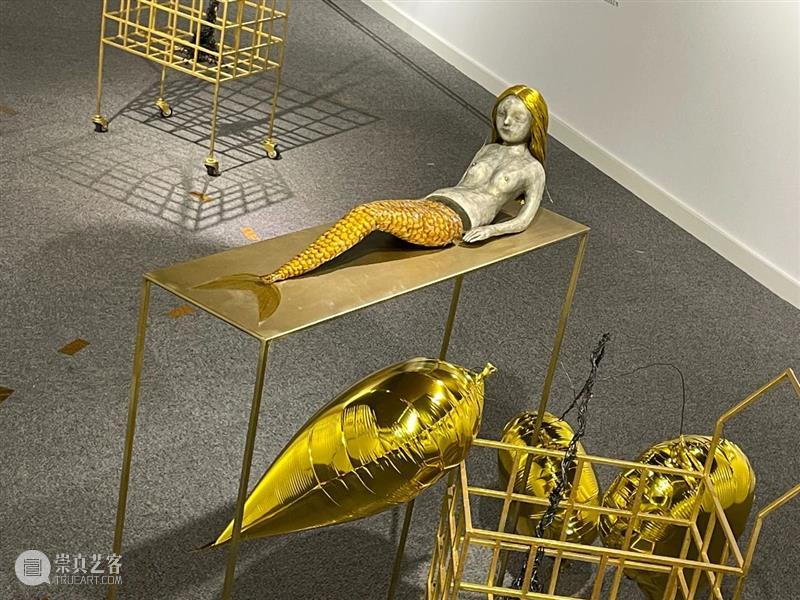 These works represent mermaid specimens created by the artist. Huang Lan realized that human beings have developed a strange habit: they tend to create and display specimen of those things that they like but that are about to fade away. Huang Lan likes beautiful things, but also specimen. The mermaid specimens are installed into the mirrors: the viewers can look at themselves while contemplating the mermaids. 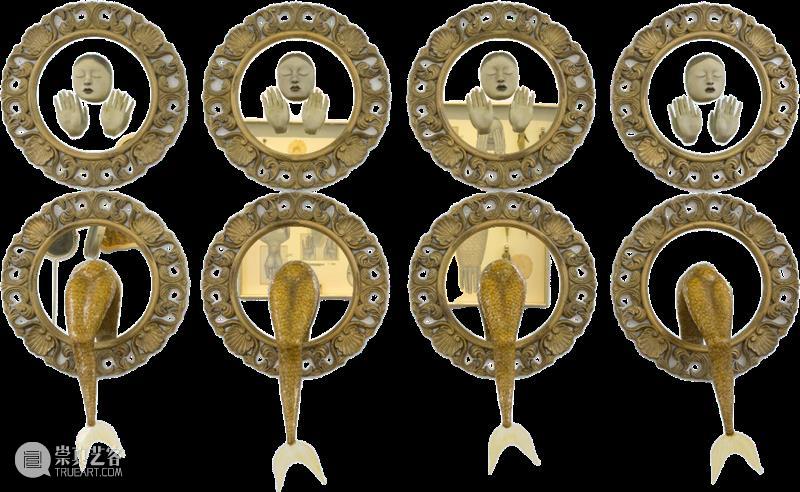 and I have a strong desire to express my creative force.” 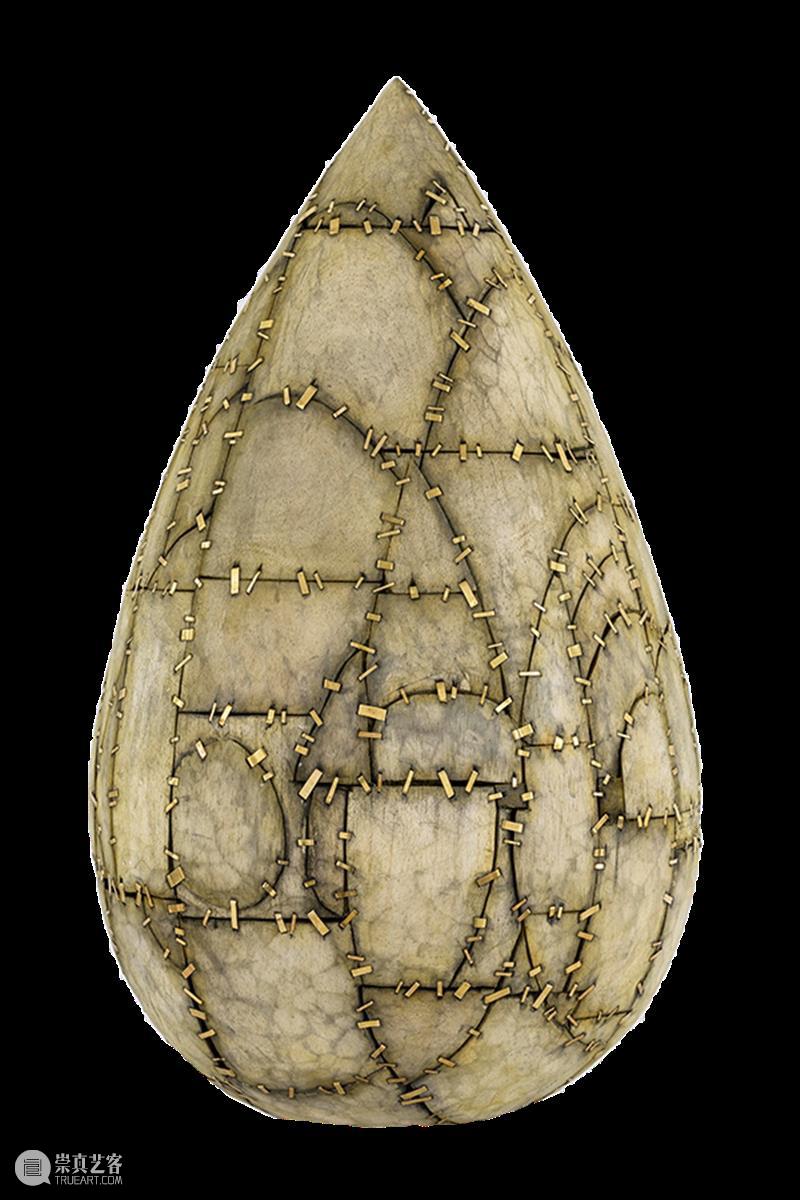 Shopping Cart&Holy Water is a continuation of the artist’s performance from the past year titled Holy Water. Inflatable balloons called Holy Water are fixed to the golden shopping cart through aluminium and steel wires. Some of the balloons sag to the ground, some others reach the ceiling of the exhibition space: the overall visual impact is deliberately awkward. 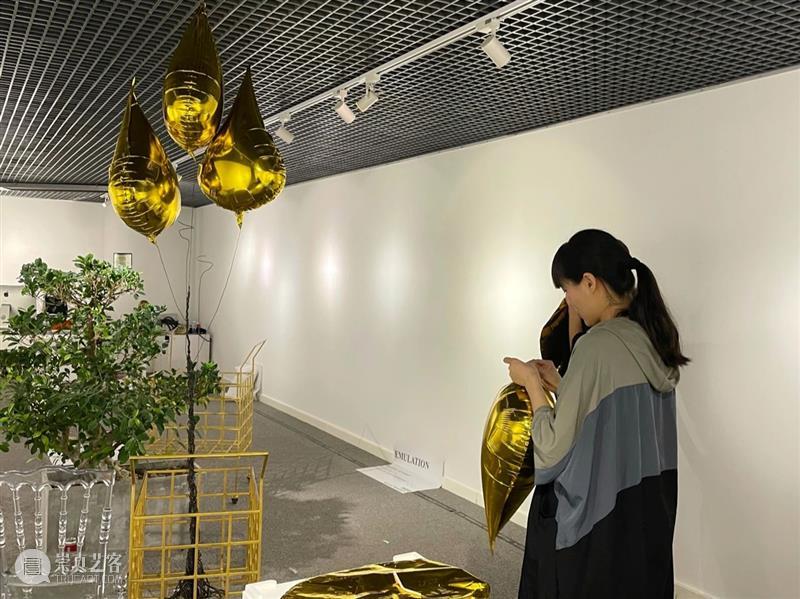 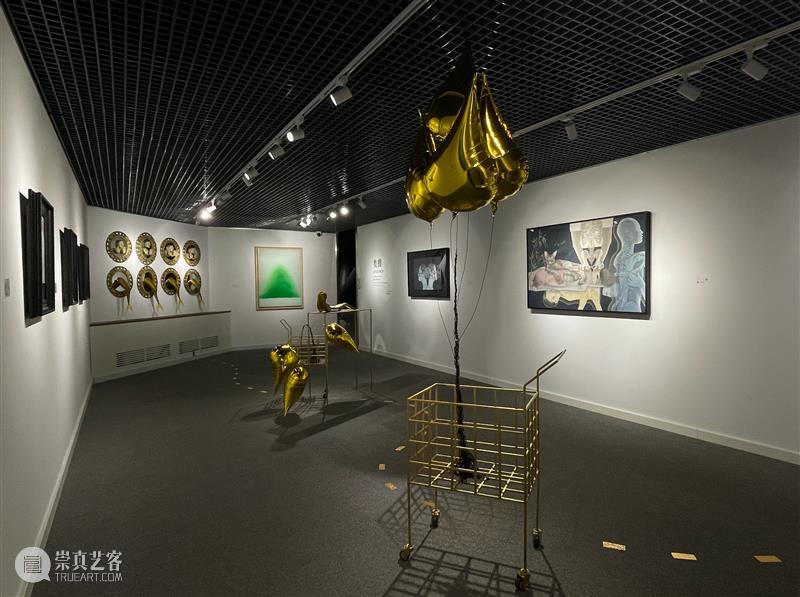 Huang Lan says that her works are like a diary with no continuity and connections. She makes works when she wakes up until she goes to bed. This is how she talks about her working process which is based on a daily effort to accumulate experience, to rethink and to ultimately create. Her works are not without connections as she says. In the exhibition hall, a yellow line on the floor connects her works on display. We can see that all her works share a unitary and recognizable external appearance as the starting point: the more she creates, the more the inner logic of her works gets strengthened.

Talking to her, we can discover a talkative and sincere artist. She has a very clear vision about the original intention and the final aim of her works; when she is interviewed, she doesn't give any ambiguous answer.

Shopping Cart&Holy Water is a new work specifically conceived for this exhibition. The thin threads attached to the balloons are in aluminium and steel. The installation made of balloons called Holy Water was initially presented at an art fair, is that correct?

Yes, it was presented at Art Beijing in 2015. In that occasion, I was dressed up like a nun pushing a shopping cart and selling Holy Water for 30 yuan each. I wanted to have a confrontational and provocative approach towards the fair: I was out of context as if I was selling vegetables at an art fair. I was also hoping that viewers could take something away with them as souvenirs. The original plan was to sell 5000 balloons but in the end, when the fair started, just 200 balloons were delivered so that was the best that we could do. 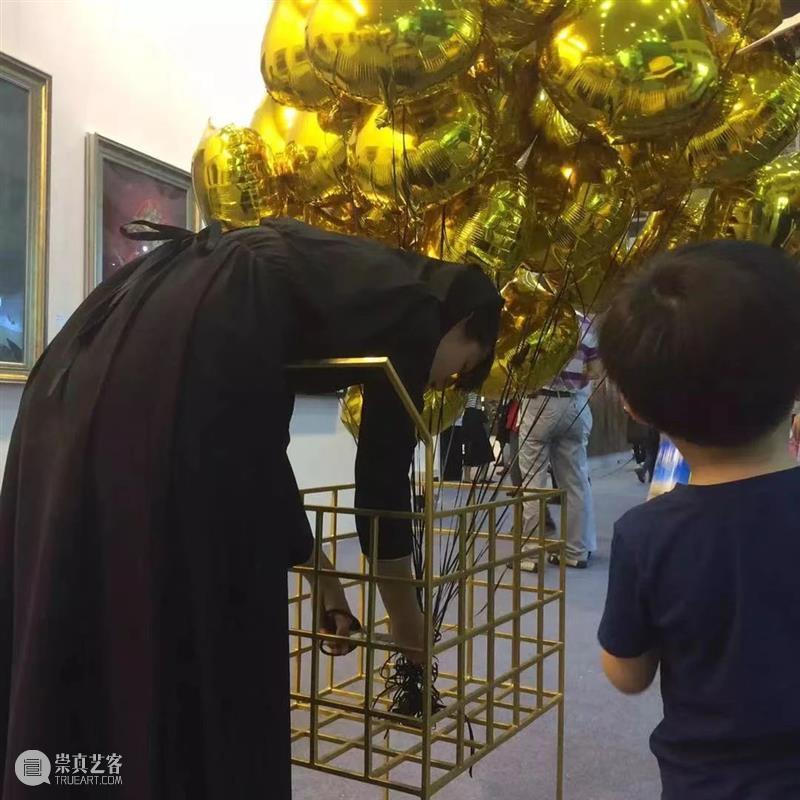 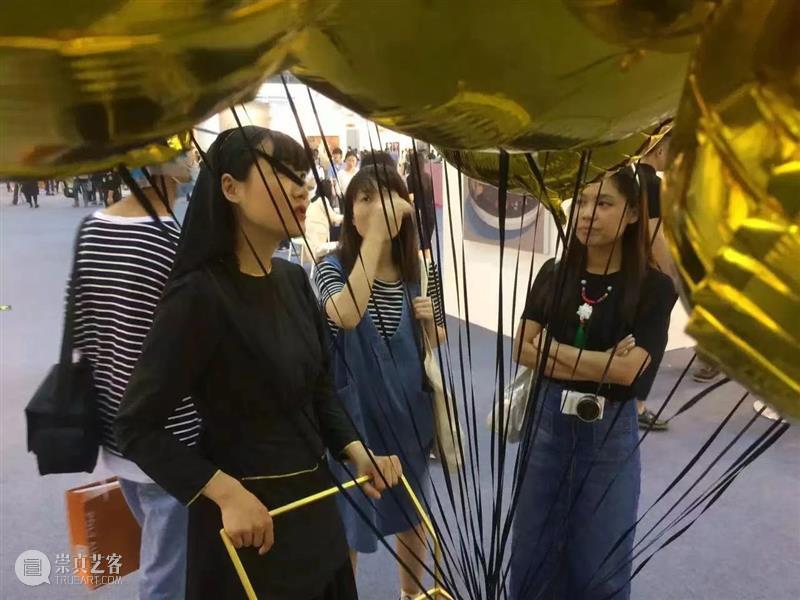 Afterwards, my friends saw a kid holding my Holy Water in a restaurant. My balloons flied up to the sky to reach Daxing, Changping, and then to ultimately disappear. This is what I wanted to achieve.

Holy Water is a symbol and a belief. When you first take a balloon, it is flat. The thing inside is more important, while the hydrogen and the air the balloon is filled with are extremely ethereal. When we were setting up the exhibition Parallel Convergences, you suggested to use steel wires to fix the balloons to the shopping cart and I agreed. Balloons themselves became specimens and reproductions of real balloons without their original function: these balloons indeed could not fly and that was really tragic.

Why do you often use golden color in your works? 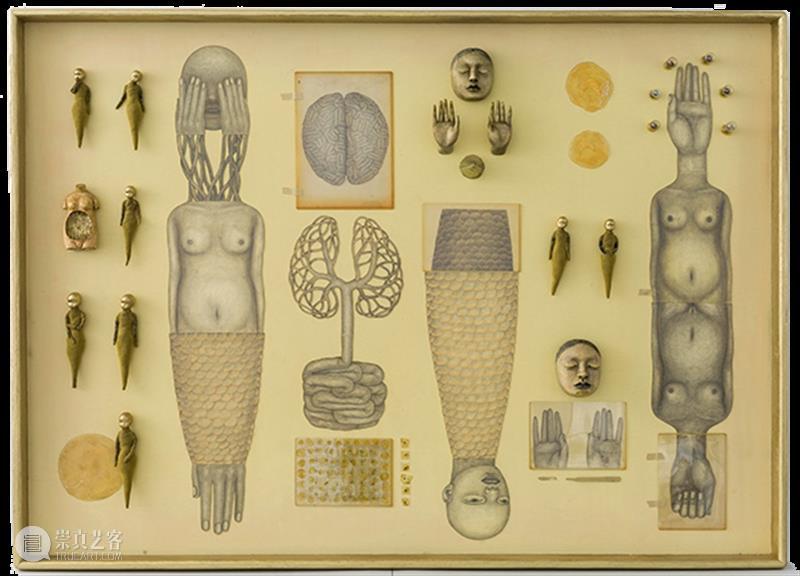 What is the crucial point of your creation?

I think that now I understand that only young artists could rely on hormones: I also know that there are artists that rely on their hormones until their 80s, but I am not like that. For me what is important is to protect my talent and to continue to be productive. 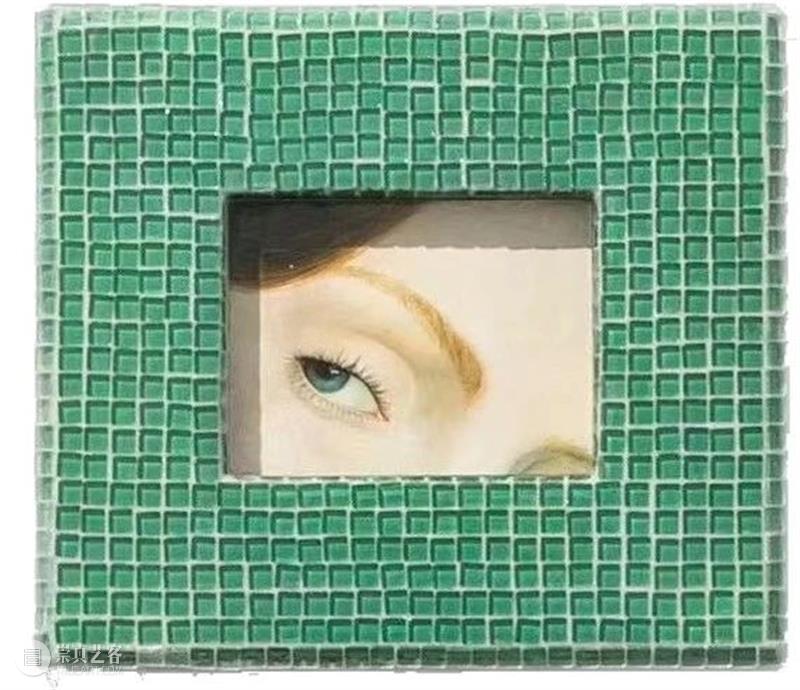 Artistic creation is a progressive process: I am very fascinated by the concept of repetition. When I was working on the Mermaid Project, the creation of the scales on the tale of the mermaid looked similar to rice transplanting: I like the idea of presenting my work as farming on a large field.

Humans are very insignificant creatures. I think that the core of great things lies in the capacity of placing life within a process of repetition, taking into account its temporal limits. This is why I always like uneasy works. I think that small and simple works with a strong and powerful visual effect are interesting too, however I am not that kind of artist.

Would you pursue repetition for its own sake?

Not really. I spend time for the things I believe. It doesn’t matter how much money one can invest in an artwork, if it doesn’t encompass the notion of time then I don’t really value it. Frescos, gothic churches are all great works of art.

What does being an artist mean for you?

Artists are not meant to provide people with solutions. They need to think and to unveil to other people what they have observed and analysed. It is important to see the works of a wide range of artists. 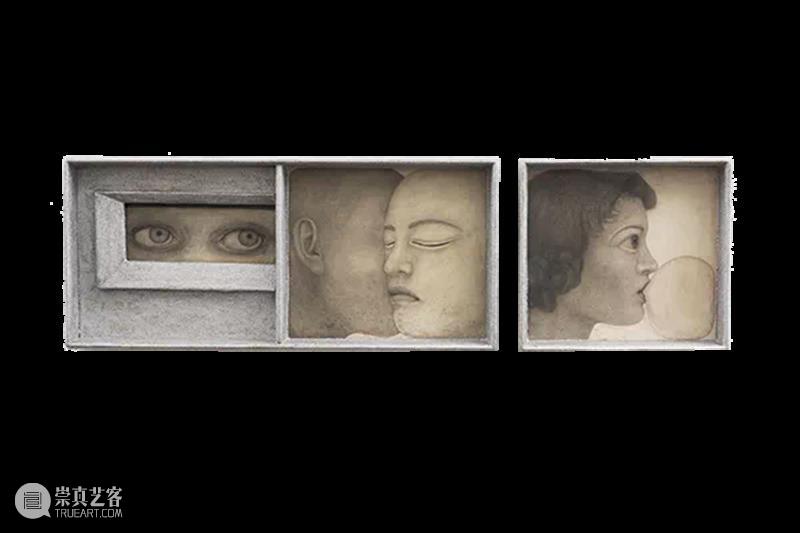 Feminism does not influence my creative process. Maybe, once the work is completed, elements of feminism can be detected in the artwork. As a female artist, I cannot help to be asked what I think about feminism. I felt obliged to read The Second Sex, but I found it rather useless. 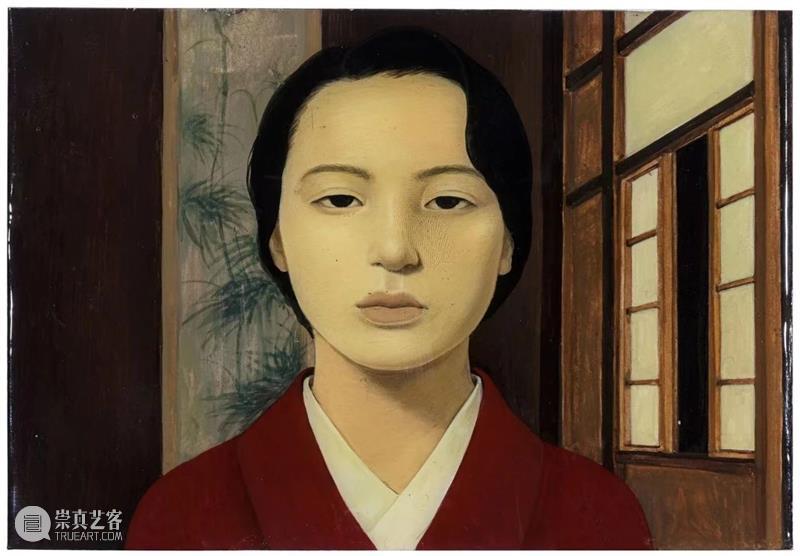 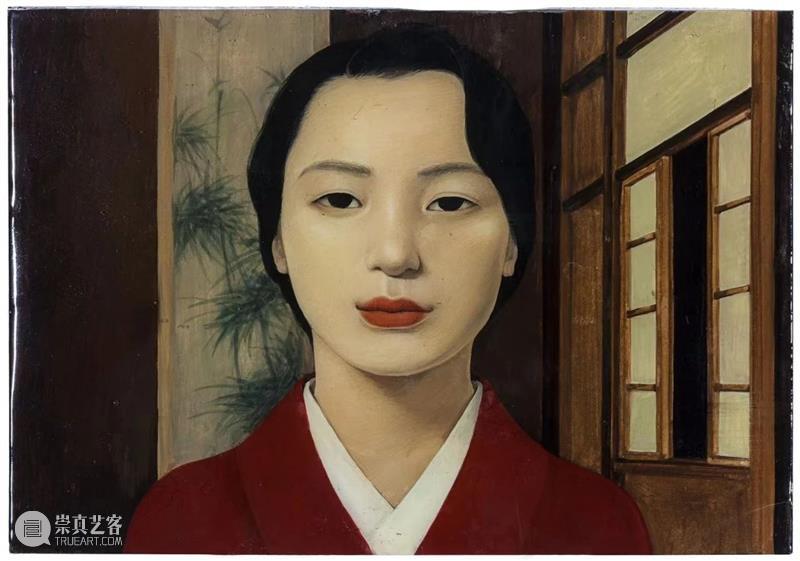 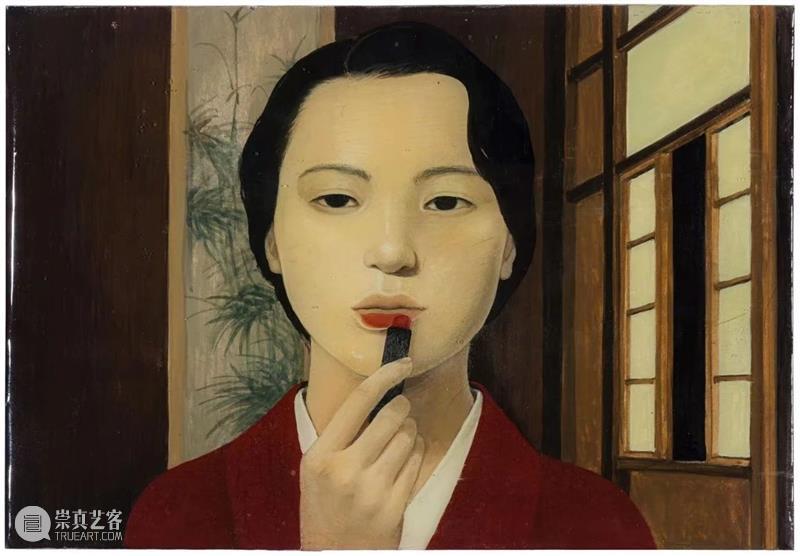 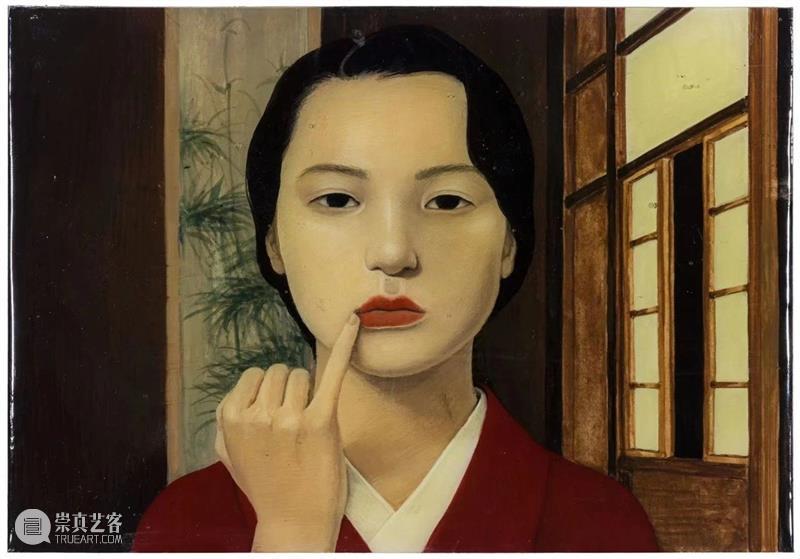 What is your source of inspiration and the pivotal force for your artistic creation?

The inspiration comes from cartoons, films, videogames. I am not necessarily just interested in art, however good artworks give me energy. The series of tempera works I am currently working on reflects my perception about daily life: a table, two people eating and chatting together are all elements that might awaken my interest. People captured while they are in the dining room are very authentic: the act of eating, like other physical needs, is very basic and essential. 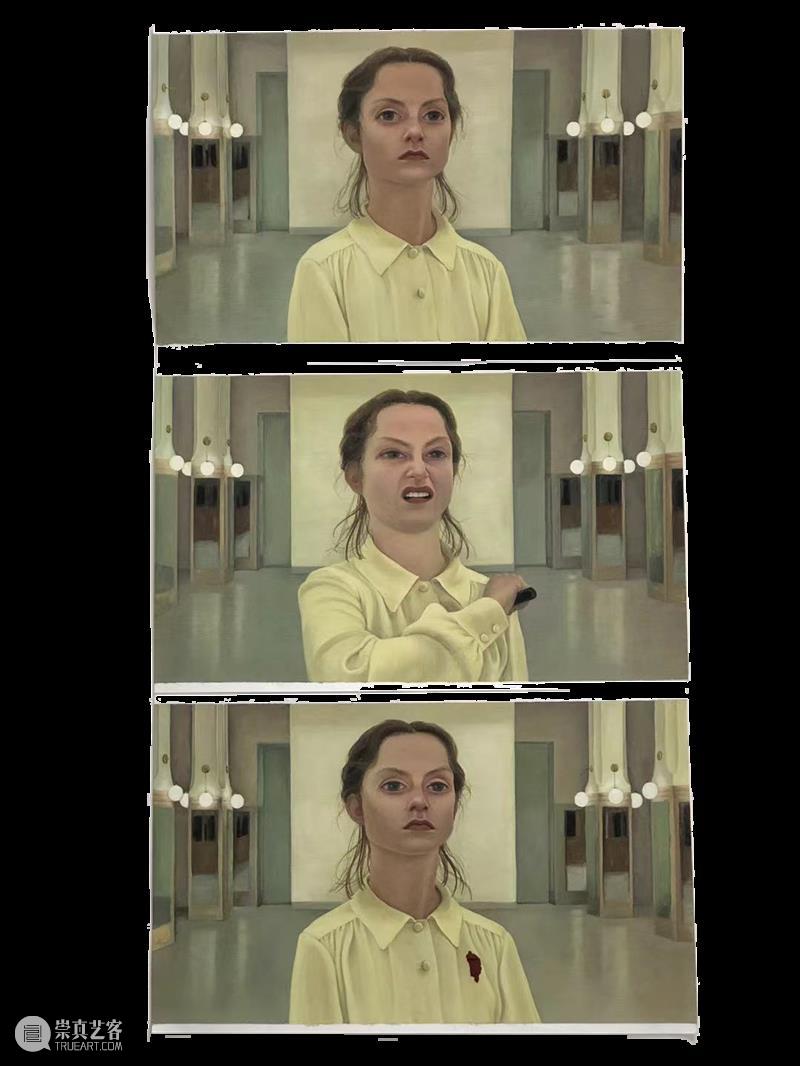 At the same time, I have a repulsion for daily life. I don’t consider marriage, pregnancy, cooking as necessary and natural elements in life. When I paint a girl washing dishes in the kitchen, I imagine her struggling with the routine of her daily life or compromising with it. I remember a painting titled The Decisive Moment depicting the image of a young lady lifting and bringing down her leg. The real roaring waves of life usually cannot be seen. 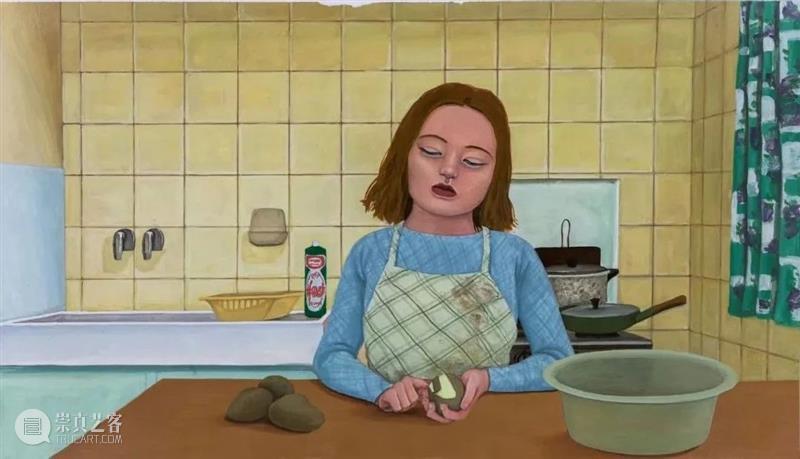 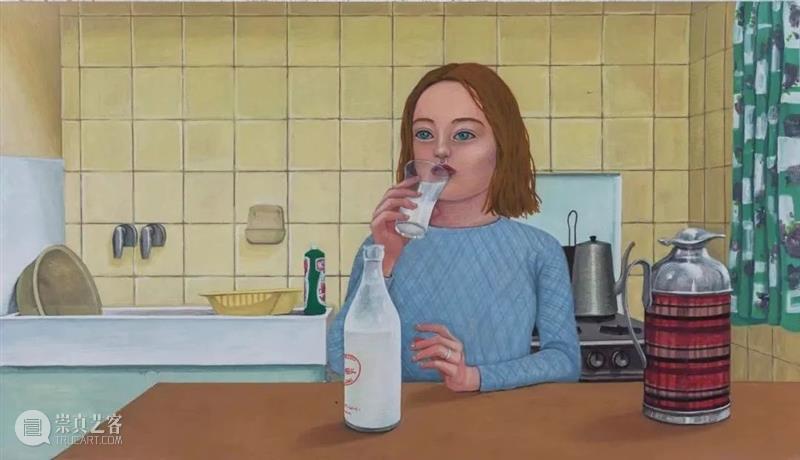 Since 2015 I have been working on the cartoon The Story of Red, which it is a continuation of the previous series of Mermaid Project: taking the mermaid form as a basis, more narrative elements are added. It is not a taboo for me to talk about dark things: I hope everyone can face them as they also hide a special beauty that is just not recognized. 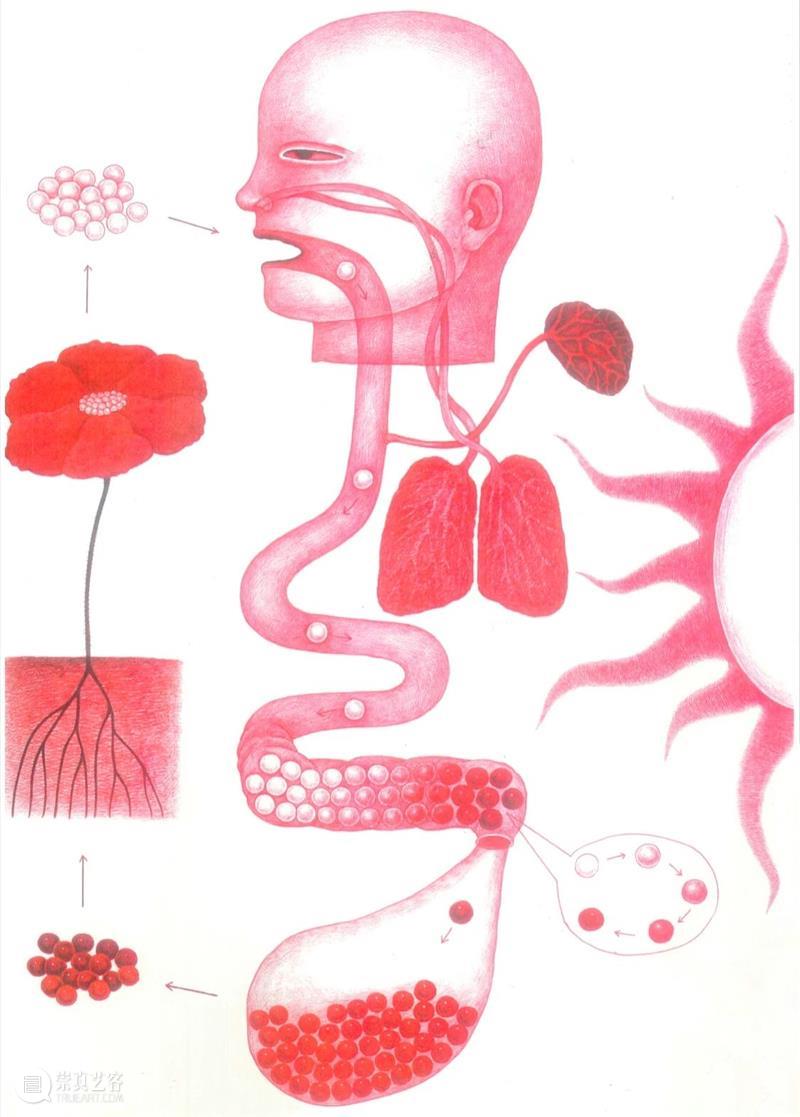 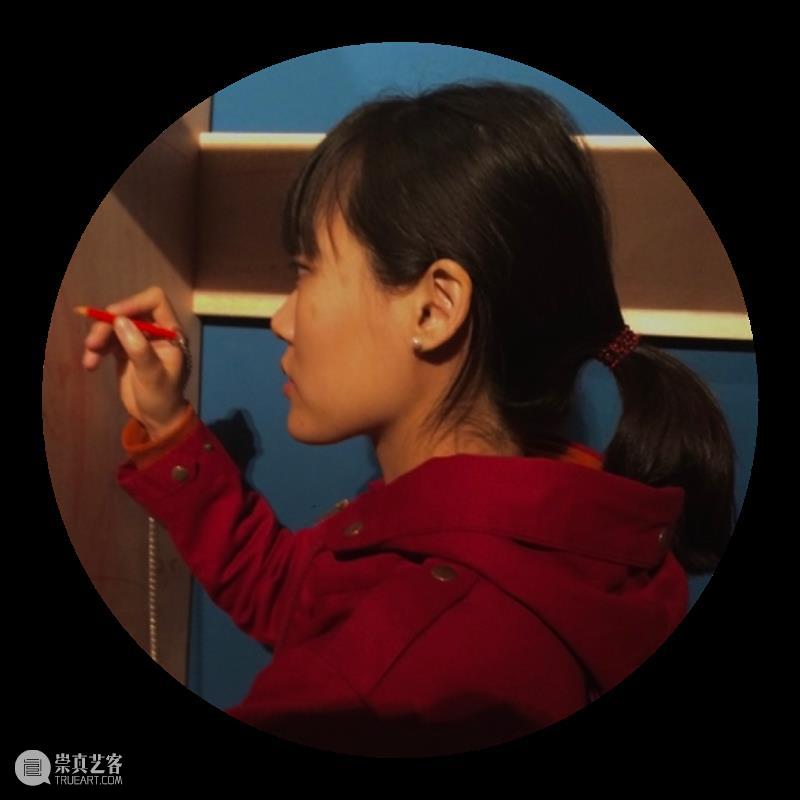