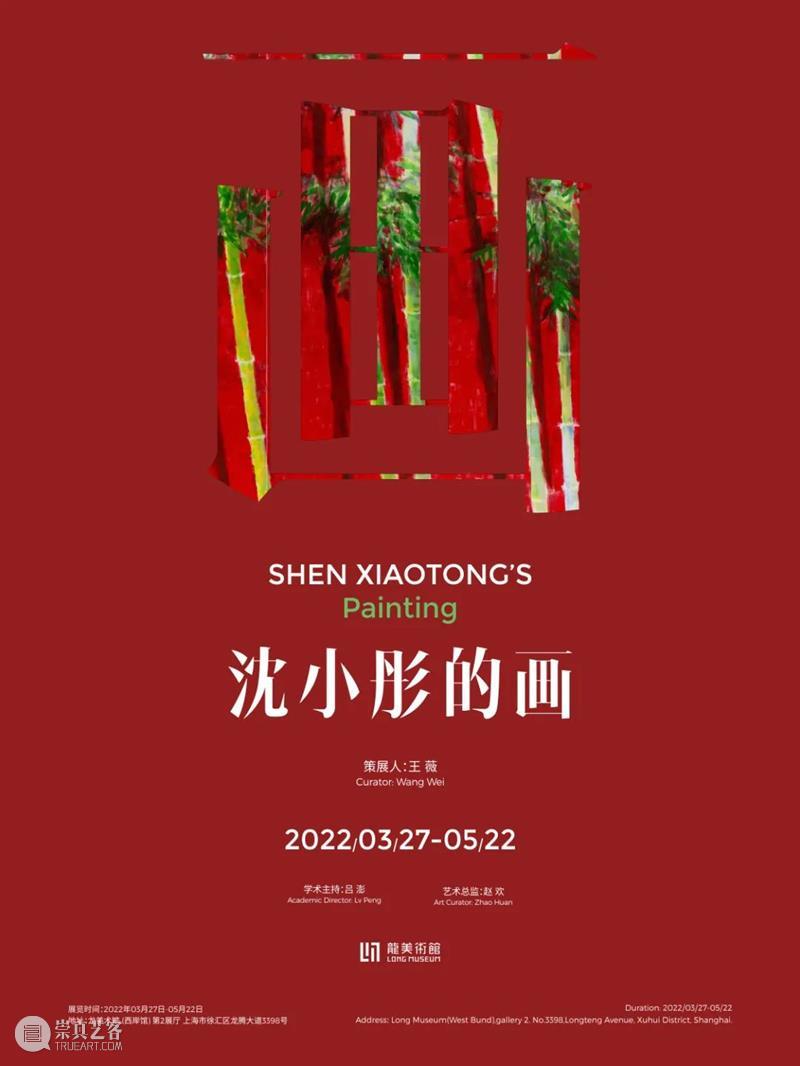 From March 27 to May 22, 2022, Long Museum (West Bund) is pleased to present SHEN XIAOTONG’S Painting Exhibtion. This exhibition is Shen Xiaotong's first solo museum exhibition in Shanghai, curated by Wang Wei, the director of Long Museum, Lv Peng as the academic director and Zhao Huan as art director. It mainly presents Shen Xiaotong's works in the past ten years, including Face, Flower and Fruit, Chinese Ink and Landscape, Bamboo and other series. His work frequently depicts friends, or the theme of ordinary things in everyday life, showing the detailed observation and perception of the artist in his daily life, as well as the subtle spiritual world of the artist in different periods underneath the images.

So here we are, in the year of 2022. A lot has changed.These changes may not matter that much, after all, years are just a set of parameters people apply to the world, obscuring the actual relation between them and the world. If we understand this, then painting in 2022 does not have to be either intolerably boring or exceedingly difficult, as is suggested by contemporary art theory, or contemporary art exhibitions. In 2022, what counts as a good painting? As a matter of fact, goodness never changes. Goodness is a discovery that human beings, presiding over their environment, have made about the world. Today, people are bent on proving their uniqueness, forgetting about what the world is like. Paintings of Shen Xiaotong do not follow a formula, nor do they boast unusual creativity. It takes a lot of work to make them look plain. They bring a sense of detachment that has become quite commonplace: “Between heaven and earth, a man finds himself a stranger in a strange land.” Turns out one cannot even know where he is. As a concept, it is nothing complicated. But, knowing and doing are two different things — while we all like stars, years could go by before we realize it has been long since we look up into the night sky.

In 90’s China, it was easy to paint a good painting. Back then, being a good painter had a widely recognized set of criteria. If anyone has any questions regarding those criteria, they only need to check out Shen’s paintings from that period. One story we need to know, old as it is, is that people saw him as an art prodigy before he turned twenty, something anyone who has known him for a long time would tell you about. At the time, when the art market was not yet a thing, at least in Chengdu, many artists who had not made a name for themselves had been touched and inspired by his works. He became the reason for them to continue painting, come what may. Then, as contemporary art gradually took shape, when postures and concepts became more important than a good painter, many collectors pointed to the rising price tags of art works to prove the legitimacy of those false concepts. Contemporary art was like real estate in the 2000s, where the price was disconnected from the value. Shen was invited to the bonanza that came with the market frenzy. He declined, saying that he preferred the high road.

To say one is a prodigy is not necessarily a compliment. A prodigy is not someone who is confident that they could easily excel, but someone who does not understand why people cannot do such simple things. Shen’s loneliness is inevitable. He does not want to do simple things. He does not want to paint the way he knows certain people would love. He becomes someone who is happy and interesting. Many years later, those criteria become a liability, a starting point that is bewildering. When artists finally start to choose their own artistic paths, Shen has been down his path for quite some time already. It may not prove much. It certainly does not mean that he is one of the best. But surely, he is the best version of himself, staying true to every brush stroke he makes on the canvas. He knows all along that in the end, there are no good or bad artists, be they exceptional or mediocre. There is no winning or losing in art. Artists are here to make the oftentimes horrible world a little bit better, so they need to be a better person first, rather than a person that needs validation. His paintings are like that — quiet, self-sufficient, untroubled by attention, or the absence thereof: like a landscape, or the starry sky, no matter if people see them or not. They are there, nothing particularly useful, nothing particularly beneficial. 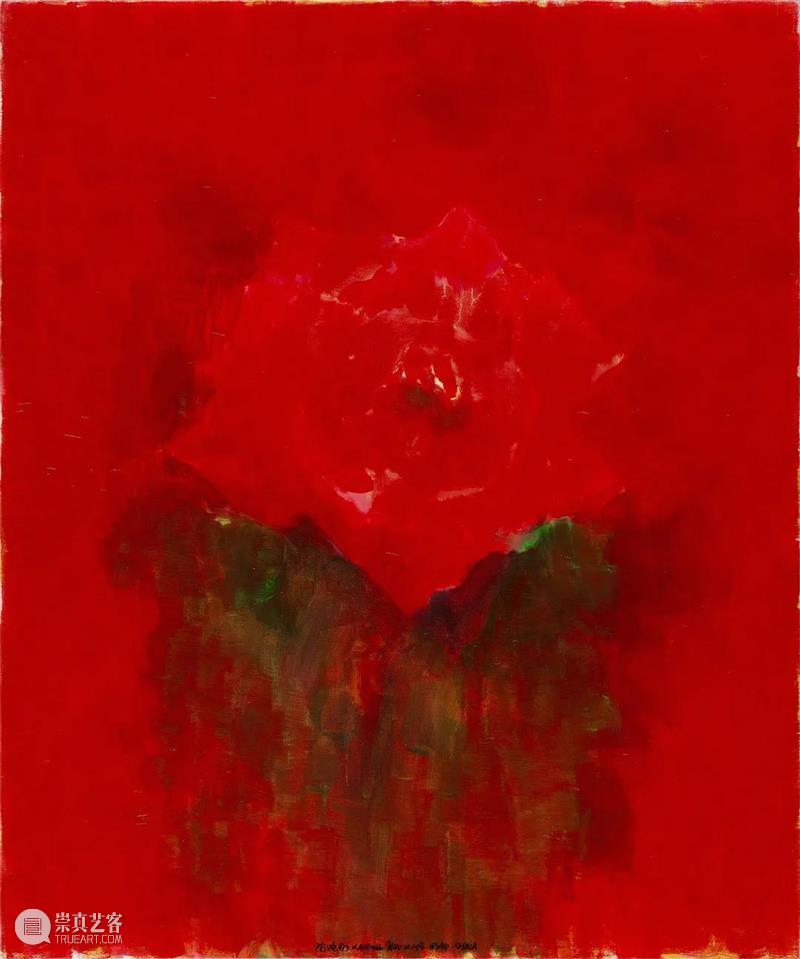 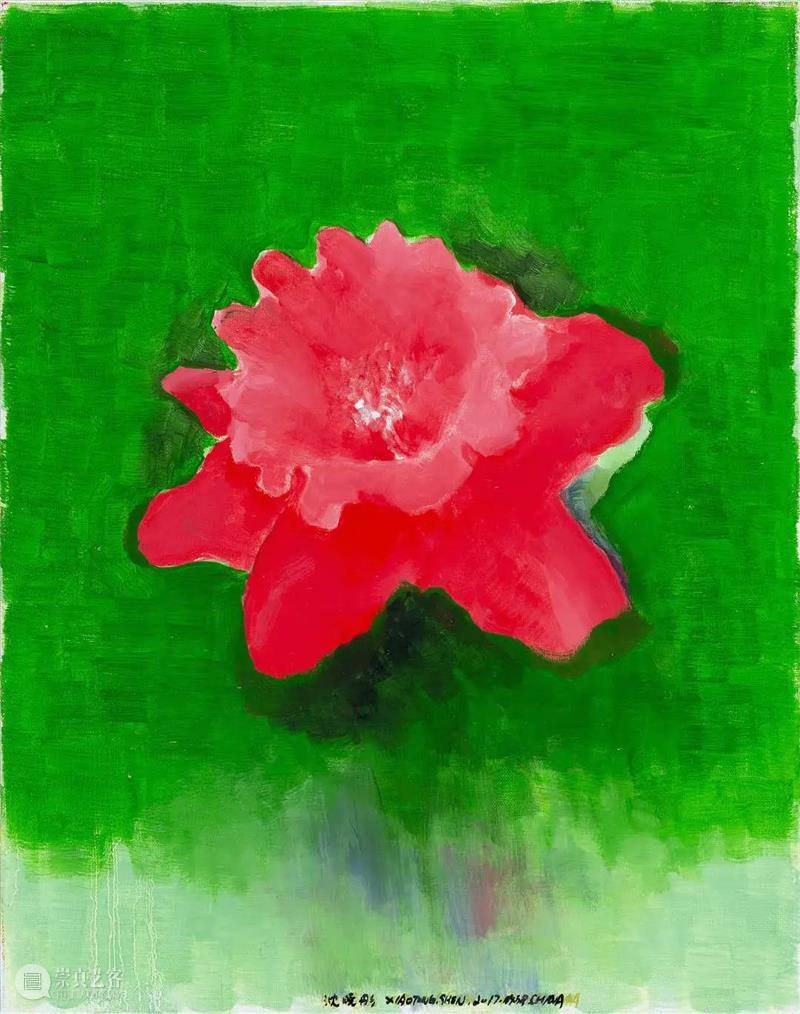 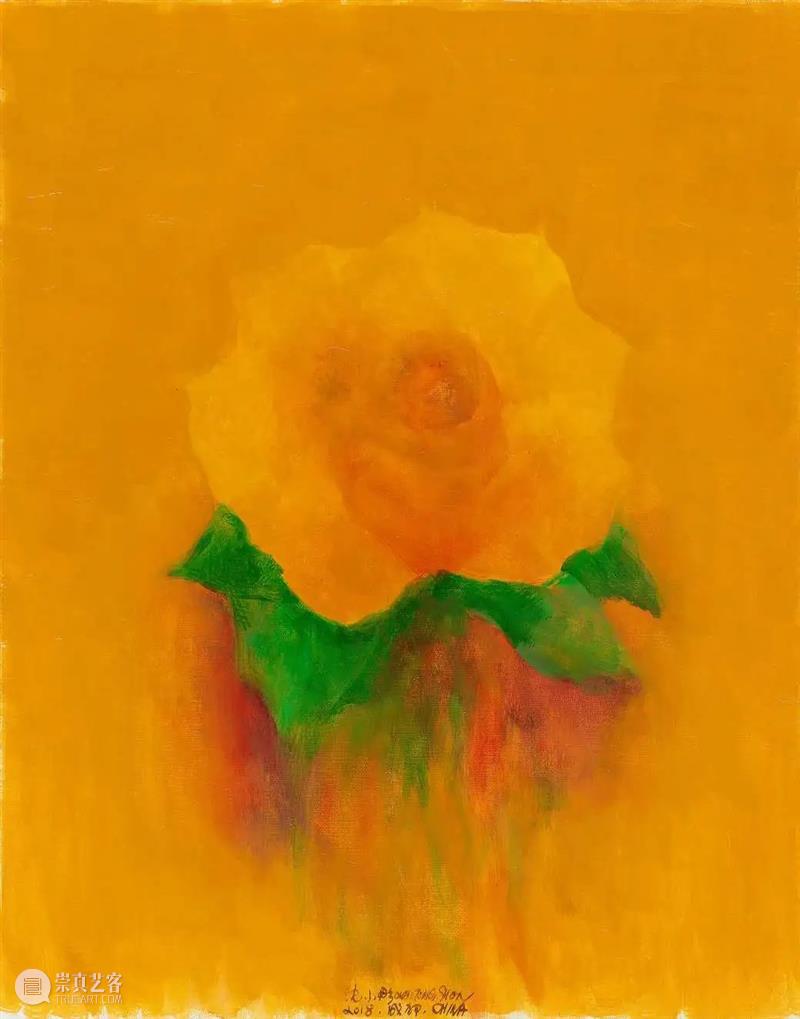 When we look at the stars, our vision blurs into the infinite. We see how the light that comes from eons ago becomes the moment we live in. In front of Shen’s paintings, one’s vision blurs as well, as we witness how the strokes and colors that come from the past have come together to reflect what we are today. The colors on the canvas are thin, every stroke is plain for everyone to see — so much so that the painting as a whole may at any time, or is already crumbling into countless tiny pieces, shattering any meaning or concepts they may or may not have. The so called painting is just an impromptu ensemble made up of colors and strokes, just as civilizations, societies, languages, or the starry sky, are just impromptu ensemble as well. What we need to understand is that these ensembles are conceptual; only the individual people and the individual stars in these ensembles are real. Human folly lies in our tendency to treat these concepts as real, while sacrificing the concrete, the real components that comprise the whole. It is in this regard that human folly goes against the nature, where the strife is always concrete and specific. Disregarding the concreteness of life is the source of many evils.

Shen’s paintings remind us of the fact that there is no painting, there is no image, and there is no language. There are but strokes of paint left on the canvas. These strokes are not a signifier of the relation between the painter and his works, because art works are conceptual and abstract as well. The only thing concrete is the unique relation between the artist and the materials. An artist has nothing other than their materials, just like a star has nothing but the nothingness around it. After the theory of relativity, people finally understand, “Spacetime informs the object about its trajectory, while the object informs the spacetime about its geometry.” In the end, stars do not exist in a unified universal order; instead, they are living in their own separate universes, alone, by themselves. In Shen’s paintings, materials are like the universes stars live in: they inform the artist about the trajectory of his brush strokes, while the artist informs the materials about their geometry. But, even within this intimacy, they remain alien to each other’s identities, to each other’s existence. Existence itself is also abstract: Nothing exists, everything is but an excerpt of a continuous movement. This is what people see after the image collapses, the endless nothingness behind the stars. 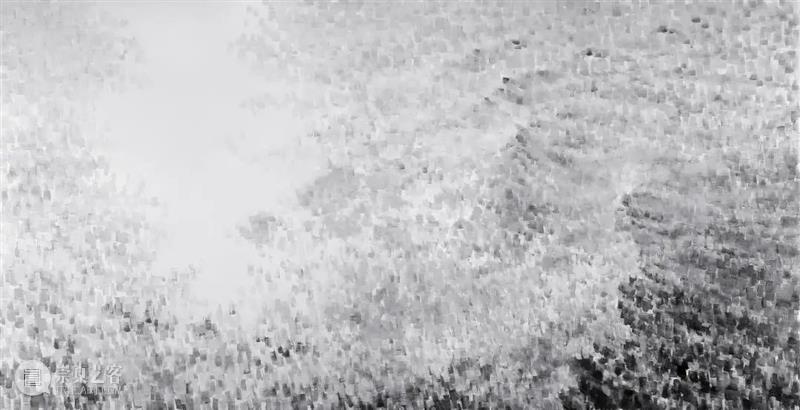 Here, people encounter a certain melancholy, as depicted by Dürer, or Su Shi. This melancholy, this towering, overpowering, permeating melancholy, morphs into things that are concrete and indivisible, that defy categorization and exist for themselves, that also transcend their own natural workings — stygian oceans, riverside pine trees, hilltop castles, wizards’ spells, golden masks, underwater Ophelia, rainstorms, a giant’s footprints, a humpback’s tail, a broken egg, a street corner plastic bag. When people muster the courage to face the real world, and survive, they will realize that these things can mitigate the perpetual doubt and the gaping wounds. They become an exit from a most impenetrable and most dismal place. We go in through the exit, and we will find desires, death, humiliations from imperfections that reality imposes on us, as well as disconsolation and shame for being human. People should not be stranger to this kind of feelings these days. They are always there, and cannot be avoided. After all, human beings preside over their environment, and are made to find out about this world. For Shen, exits are presented as apples, mountain forests, bamboo leaves, or something that, though trivial, refuses to go away. They are beautiful. They never overlook those in this world that cannot be overlooked, while remaining grateful to the miracles made possible by kindness and love.

“The mind is the universe.” Human beings are perhaps a mirror the universe creates for itself out of sheer loneliness. Contents in the mirror are no creation of its own. Shen’s strokes are like reflections of a mirror which, with defects and scratches all over the surface, tend to be blurry. But a mirror is a mirror, where all the bells and whistles are superfluous. When the situation continues like this, the universe itself turns into a mirror. When human beings see this world, they see only themselves. Things simplify. If there is no room in our minds for bias or division, for hostility or discrimination, there will no longer be ideas like the East and the West. People do not come to this world to prove their identities. Not to mention the fact that the concepts of the East and the West only appeared after the 18th century, to create the myth of a western civilization by European scholars at the time, propping up an East to serve as its foil. When people think in these terms, they already fall into the trap of colonialism. Shen’s paintings are not like the works of an artist from the East; they are the traces left behind by a person who grows and matures in life. If we have to talk about cultural identities, he proves, to everyone’s delight, that such an artist can be found in contemporary China. But it has nothing to do with other artists — if there is such a thing as cultural confidence, it should mean that one does not have be proud of one’s own cultural identity, but one should always try very hard to be a cultured person. 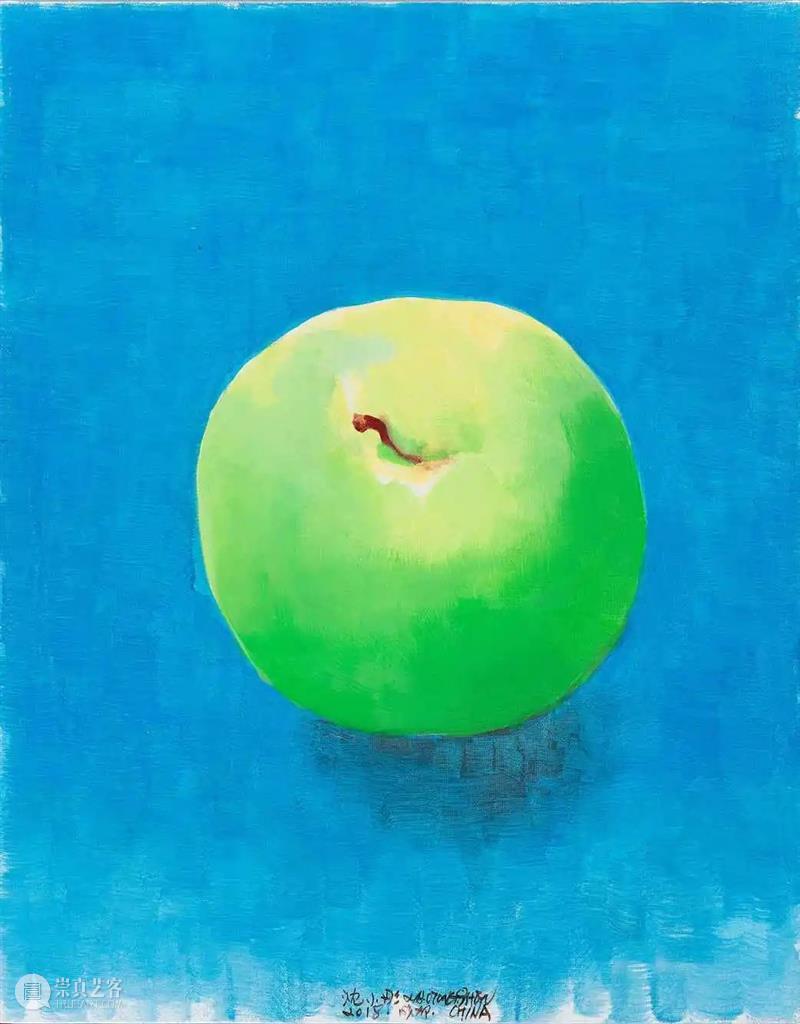 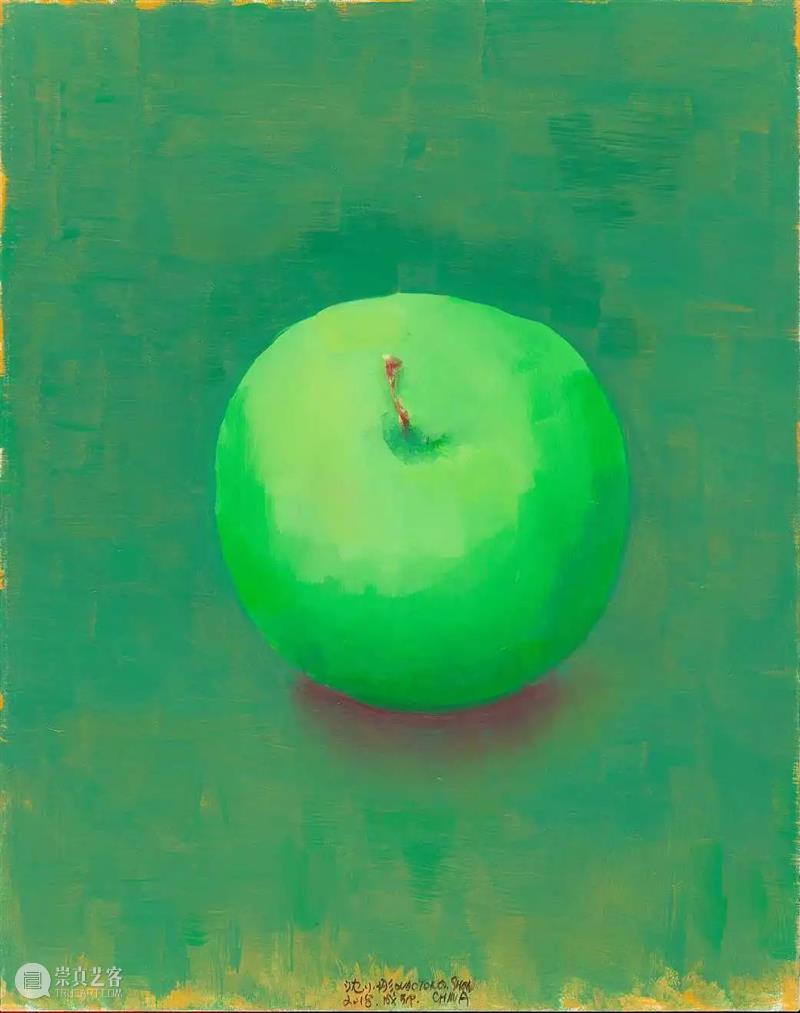 Why Shen’s paintings are good is a non-question. How is a flower on top of a hill in early spring good? One thing is clear though: Shen’s works are not willy-nilly, nor are they manifestations of unity of man and nature. They are cool-headed and precise, and are therefore filled with deep emotions. This quality does not originate from any cultures or traditions, but comes out of natural instinct when one faces the world with single-minded focus. It exists where all methodologies and forms make their debut, when concrete reality eclipses abstract lies — the mechanical clock in Tang Dynasty, the landscape painting in the Five Dynasties, steel making in Song Dynasty, math in the Arab world, physics of Galileo, poetry of romanticism, the rocket that landed on the moon, or any attentive observation of sunlight, rainwater, or flowers.

People love concepts, for with concepts, people communicate, and apologize for themselves. Concrete beings cannot apologize for themselves. Science and art are concrete; they cannot apologize for themselves. They are predicated on uncertainties and postulates. The basic postulate of science is that the laws of nature are constant across time and space. As the postulate that all physics studies are based on, it is not only unprovable, physicists cannot even say what “space” really is. The postulate of art is that human nature is inherently good; therefore art demands inner truth that is whole and valid. It is also unprovable. It is even more difficult to verify than what is inside a black hole. No matter, many people in this world still take this as the starting point of their life and work. They treat with love and reason everyone around them, and everything in this scarred and broken world. Shen Xiaotong is one of them. 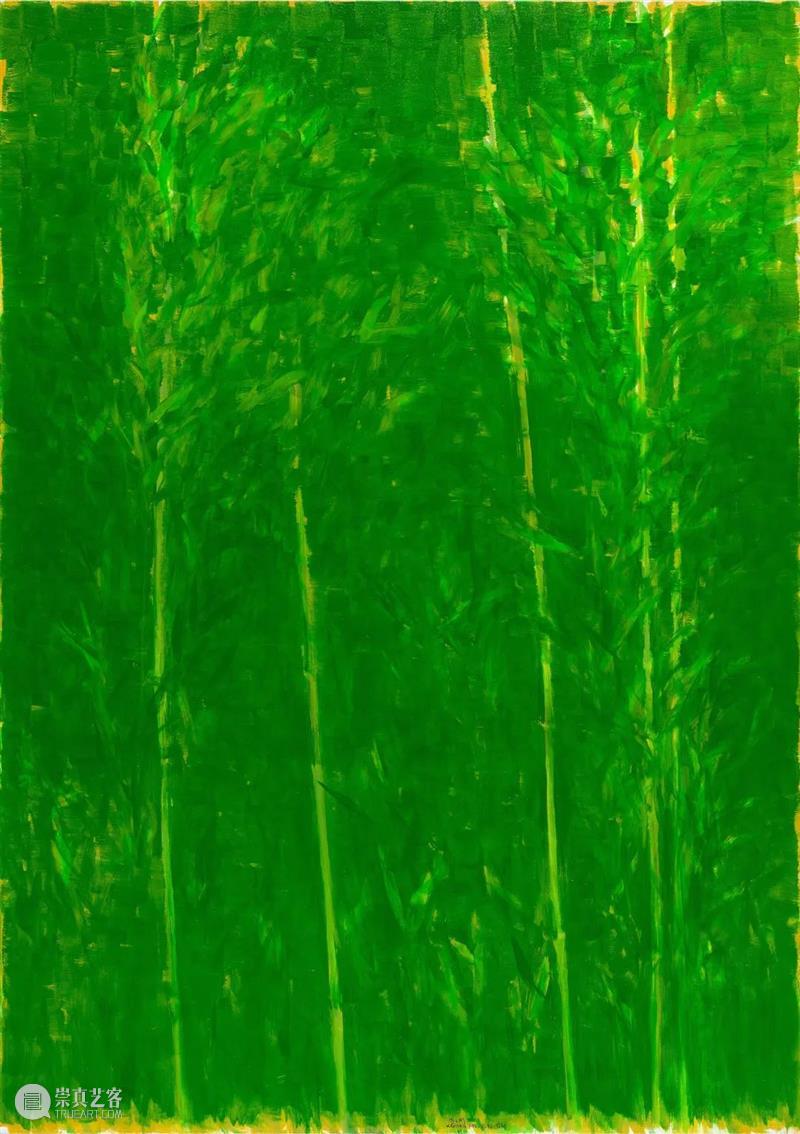 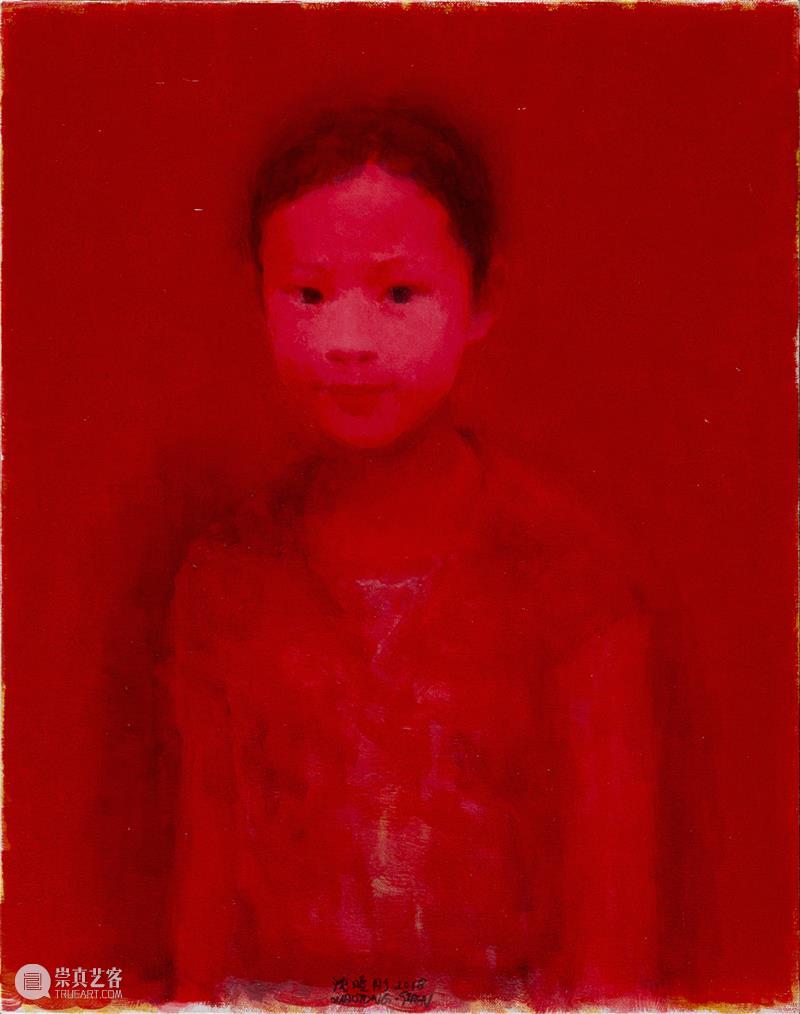