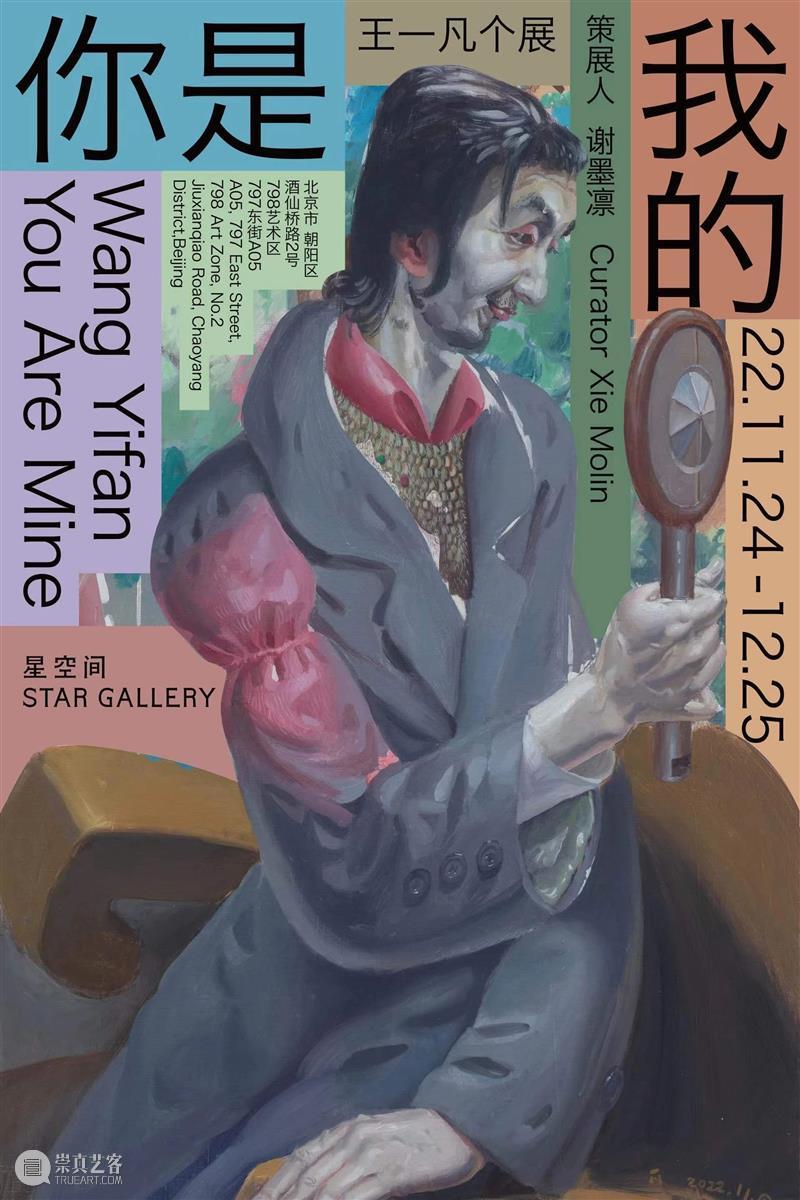 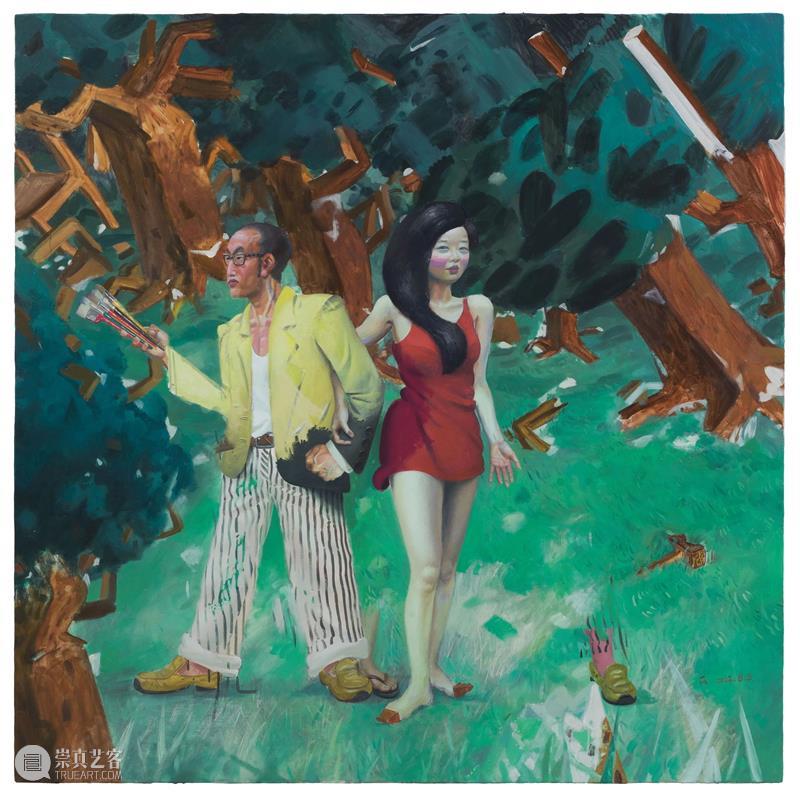 In the Old Timberland with Wu Xiaoke

Star Gallery is pleased to present the solo exhibition of Wang Yifan—You Are Mine—from November 24 to December 25, 2022. Curated by Xie Molin, the exhibition features over thirty recent paintings of the artist created during the past five years. Wang Yifan and Xie Molin became friends while studying at the Fine Arts School Affiliated to China Central Academy of Fine Arts. Very close ever since, they are familiar with each other’s paths of artistic pursuits. That being so, Wang Yifan invited Xiemolin to curate his solo exhibition this time.

Wang Yifan has a playful, childlike demeanor. This attribute, in conjunction with his love for verbal communication and observing others, allows figurative painting and narrativized imagery to converge and form his unique visual language.

Often, Wang’s paintings are set off by certain events—both his friends’ and his own life and romantic encounters could give rise to his painterly expressions. Relying on his attentive intuition, Wang maneuvers his keen senses to capture the people around him and turn them into images on canvas. “There are a thousand Hamlets in a thousand people’s eyes,” says the proverb. Considering Wang’s work, one could say that Wang alone has seen a thousand “Hamlets” in any selected figure whom he has chosen for continual observation and depiction. The figures in his paintings appear simultaneously genuine and affected: genuine in the sense that they seem to be telling their respective life stories and mental states, while affected in the sense that their appearances are choreographed by the artist. By designing his models’ expressions and actions, as well as the accompanying scenes and props, Wang conveys his observations and opinions on humanity through plotted laughs and curses.

If the audience elects to savor the texture, brushwork, tonality, and forms of each of Wang’s paintings, the many details will put him or her in Wang’s shoes, letting the audience appreciate the repeatedly depicted dark corners, decay, grotesqueness, and desolation. Everyone seems to be dwelling in their own ridiculousness. And the artist himself is no exception to this.

Since he was young, Wang has been believing in the sayings passed on to him by the adults: “Art is fantastic, and unorthodox art makes fantastic artists.” “You have the special look of a great future artist.” Even though Wang now knows that compliments as such are nothing more than the grownups’ arbitrary inventions that supposedly encourage children to practice studio skills, he still chooses to believe in them. Because with such beliefs, the trekking process of painting will not feel like it is in vain, and the missions and challenges of life will be fully charged with meaning. All he has to do is to paint, patiently, stroke by stroke, using his creations to testify to the authenticity of the statements. If the artist and the model could age together in the repeated painting process, the decades of the painterly accumulation shall make this practice the unique sample of the entanglement between art and life, whether in the Chinese or the global history of painting.

When I paint you into my paintings, you are mine, and I am yours, too.

Wang Yifan was born into a family of artists in Beijing in 1978. He has loved painting since he was a child. In 2003, he graduated from the Department of Oil Painting at the Academy of Arts and Design of Tsinghua University, and now lives and works in Beijing. After graduating from university, Wang Yifan practiced different media and methods, such as video, photography, writing, installation, painting, etc. For the recent decade, he has refocused on his childhood passion—oil painting. He figured that figurative paintings of people involve profound psychological analysis, creating a complex relationship between the author and others, thereby gaining a unique place in the contemporary art world. 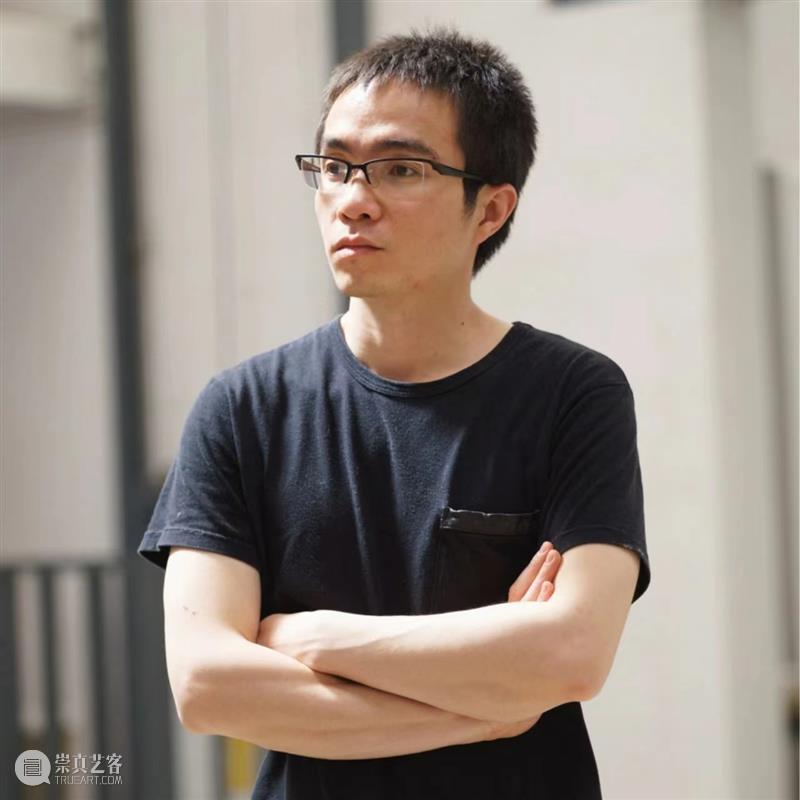 Xie Molin (Wenzhou, b. 1979) graduated from the China Central Academy of Fine Arts (BFA) and Edinburgh College of Art (MFA). He currently lives and works in Beijing.

Xie Molin has investigated the field of human-machine collaborative painting throughout his previous artistic trajectory that spans the past twenty years. The structure's materiality, the layers of colors, and the light effects are outstanding features in his abstract paintings. Through constantly developing and experimenting with the CNC platform and the special-shaped blades designed by the artist himself, he strives to work through the combination and interaction among power, law, materials, form, variant, and artistic experience to create independent and self-sufficient art forms.